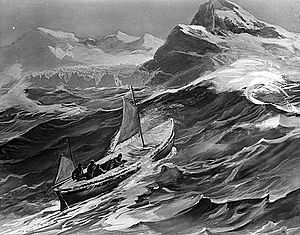 Cave Cove (Spanish: Ensenada de Cueva) is a small cove located in King Haakon Bay, South Georgia. It is best known for its connection to Ernest Shackleton's Imperial Trans-Antarctic Expedition. It was where the James Caird landed on 10 May 1916, after its tumultuous voyage from Elephant Island. The voyage is commemorated by a small plaque in the rock.

While at Cave Cove, the men fed on albatross. Henry McNeish wrote: "We have not been as comfortable for the last five weeks, We had 3 young & 1 old albatross for lunch with 1 pint of gravy which beets [sic] all the chicken soup I ever tasted." Since they had run out of drinking water arriving at Cave Cove, the men immediately went to the small stream there. They had to leave their boat offshore, and the elements tore the rudder off the James Caird. The rudder floated back into the cove later, and thus they were able to repair the boat. From here, they moved to Peggotty Bluff.

All content from Kiddle encyclopedia articles (including the article images and facts) can be freely used under Attribution-ShareAlike license, unless stated otherwise. Cite this article:
Cave Cove Facts for Kids. Kiddle Encyclopedia.