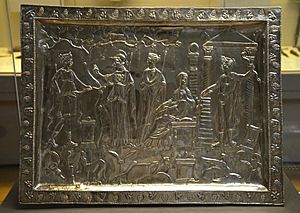 The Celtic hounds were a breed of dogs in Gaelic Ireland described in Irish legend. Hounds can be found in Celtic jewelry designs and paintings as far back as the 17th century.

Many Irish myths and legends include mentions of hounds. One of the most famous involves the Celtic hero Cúchulainn (the Hound of Ulster) or (the Hound of Culann) who killed a blacksmith's Celtic hound in self-defense. When Culann, the blacksmith, asked who would now guard his household, the young Setanta offered to take the dog's place for a year, while training a pup to replace the dead dog. This gained Setanta the nickname of 'the Hound of Culann' or Cú Chulainn. Cuchulainn went on to become one of the greatest warrior legends of that era.

In Welsh mythology, Gwyn ap Nudd was the ruler of Annwn (the Underworld) and escorted the souls of the dead there, leading a pack of supernatural hounds, called the Cŵn Annwn (Hounds of Annwn) (see also Wild Hunt). Another well-known Welsh legend is that of Prince Llewellyn 's hound Gelert, who was unjustly slain by his master after being wrongly thought to have killed a child.

The Galgo Espanol breed is thought to be descended from the Celtic hounds, as is the Tyrolean Hound.

All content from Kiddle encyclopedia articles (including the article images and facts) can be freely used under Attribution-ShareAlike license, unless stated otherwise. Cite this article:
Celtic Hounds Facts for Kids. Kiddle Encyclopedia.