Central City Village is the urban village of Phoenix, Arizona, that includes the downtown area of the city. As of 2010, it had a population of 58,161 residents.

As defined by the boundaries, Central City Village has an area of roughly 10 square miles. This includes not only Downtown, but the close vicinity and the Sky Harbor area directly east. The village is bounded by McDowell Road and the Grand Canal to the north and northeast, the border with Tempe to the east, the Salt River to the south, and 19th Avenue/I-17 to the west.

Because of its location at the historic center of Phoenix, there are many old homes and buildings located in the Central City Village that convey the history of Phoenix. Downtown, which includes the larger commercial and government buildings, as well as sports venues such as Talking Stick Resort Arena and Chase Field, is the core of the village and the city of Phoenix. Because of this, Center City village is almost unique, in that it has a much more urban environment than the other, more suburban, villages of Phoenix. 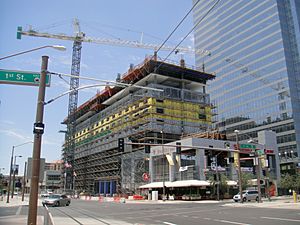 Hotel Palomar under construction in Downtown Phoenix, part of the Cityscape complex.

The village also includes Sky Harbor International Airport, the busiest airport in Arizona and among the busiest in the nation, which provides domestic air travel, as well as international travel. 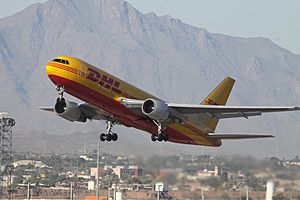 Commercial Airliner taking off from Sky Harbor in Phoenix

All content from Kiddle encyclopedia articles (including the article images and facts) can be freely used under Attribution-ShareAlike license, unless stated otherwise. Cite this article:
Central City, Phoenix Facts for Kids. Kiddle Encyclopedia.