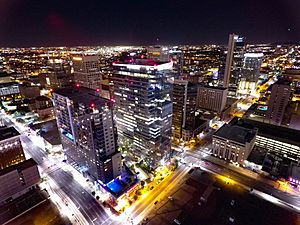 CityScape Phoenix is a high-rise mixed-use development in Downtown Phoenix consisting of residential, retail, office, and hotel components. The development covers three city blocks in the heart of Downtown Phoenix and is located between First Avenue and First Street to the west and east, and between Washington and Jefferson streets to the north and south. A portion of the development was built on the land formerly occupied by Patriots Square Park through a redevelopment agreement with the City of Phoenix. It is centrally located in the heart of Downtown Phoenix, within walking distance of Talking Stick Resort Arena, Chase Field, Comerica Theatre, the Orpheum Theatre and the Phoenix Convention Center.

CityScape hosts a number of major events throughout the year, including the CitySkate Outdoor Holiday Ice Rink in the winter, the starting line for the P.F. Chang's Rock n’ Roll Arizona Marathon, the main stage for the Viva PHX Music Festival, and more.

Phase I of the development consists of a 27-story Class A office tower. The tower houses a number of corporate offices and law firms, including major tenants Alliance Bank and United Healthcare. The office tower is also home to the corporate headquarters of RED Development, the owner and developer of CityScape Phoenix.

In addition to street parking, CityScape offers two underground garages, one under the office tower and one beneath the retail (west) block, and valet parking.

CityScape is located on the Valley Metro Rail with stops located at the intersections of Washington Street and Central Avenue, as well as Jefferson and 1st Avenue.

CityScape Phase I won a Best of 2010 award in the Office category of the Southwest Contractor’s annual awards competition.

All content from Kiddle encyclopedia articles (including the article images and facts) can be freely used under Attribution-ShareAlike license, unless stated otherwise. Cite this article:
CityScape (Phoenix) Facts for Kids. Kiddle Encyclopedia.