The Central Geneva Historic District is a set of 102 buildings and structures in Geneva, Illinois. Of those, 68 contribute to the district's historical integrity. The district is representative of southern Geneva, south of Illinois Route 38. Among the noted buildings is the Kane County Courthouse and the Frank Lloyd Wright-designed P. D. Hoyt House. The district was added to the National Register of Historic Places in 1979, and was enlarged in 2017.

The Central Geneva Historic District principally consists of land from the original platted settlement, now the southern half of the town. It is primarily residential, but does have a commercial sector lining W. State Street (Illinois Route 38). Among the public buildings are a public library, city hall, and county courthouse. The only other major road intersecting the district is S. First Street (Illinois Route 31). Most houses are two-story frame residences built between 1840 and 1900, principally from a vernacular style. Geneva's later identification as a scenic shopping area encouraged the city to invest in the restoration of several structures. The district was added to the National Register of Historic Places on September 10, 1979. 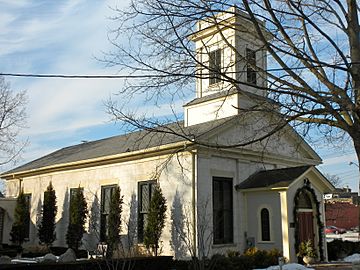 All content from Kiddle encyclopedia articles (including the article images and facts) can be freely used under Attribution-ShareAlike license, unless stated otherwise. Cite this article:
Central Geneva Historic District Facts for Kids. Kiddle Encyclopedia.