Central Park is the first public park in San Mateo, California, a 16.5-acre (7 ha) urban park bounded by El Camino Real (to the west), 5th Avenue (to the north), Laurel Avenue (to the east) and 9th Avenue (to the south). It was established via a 1922 bond measure of US$80,000 ($1,020,000 in 2022) to purchase the land originally owned by Charles B. Polhemus, and currently hosts a baseball field, tennis courts, sculptures, playground, Japanese tea garden, recreation center, miniature train, rose garden and the San Mateo Arboretum.

Central Park's recreation center is leased by Self-Help for the Elderly (SHE), offering activities for approximately 1,000 senior citizens between 8 a.m. and 5 p.m. on weekdays. SHE primarily serves low-income and minority senior citizens. The Central Park location is the only SHE activity center in San Mateo County.

The Central Recreation Center offers ceramics classes and a ceramics studio in the park in an auxiliary building adjoining the tennis courts.

Closure of the recreation center was first proposed in 2003.

The three proposed 2014 updates to the Central Park Master Plan would demolish the existing the recreation center; only one proposal calls for rebuilding the recreation center. Other informal proposals have been advanced to relocate SHE to either the yet-to-be-completed Bay Meadows Park or the existing city senior center on Alameda de las Pulgas, which would decrease access for seniors, who typically have limited options for private automobiles and public transit.

One of the earliest features at Central Park is the baseball field in the western corner, laid out at the inception of Central Park in 1922. San Mateo's semiprofessional baseball team, the Blues, played at the field from 1924 to 1941, interrupted by World War II, and resumed play in 1948 until the team was disbanded in 1978.

Prior to their move to Central Park, the Blues played as an amateur team starting in 1898 at what is now the Martin Luther King Center north of downtown. When they moved to Central Park in 1924, the Blues participated as a semiprofessional team in the California State League, winning several championships during the 1920s and 30s. Justin "Fitz" Fitzgerald managed the Blues between 1924 and 1935 after his major-league playing career ended. Light stands were added to the field in 1935, and the grandstand has a capacity of approximately 1,100 people. The field was dedicated for Fitzgerald on August 21, 1960, commemorated by a plaque on the grandstand's exterior wall.

Some proposals in the 2014 Master Plan update included the removal of Fitzgerald Field, which was opposed by local little league officials. The San Mateo City Council showed strong support for retaining Fitzgerald Field in 2015. 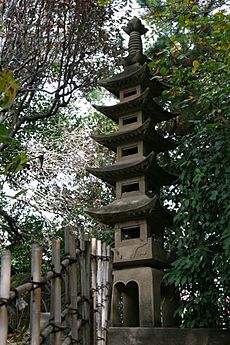 The Japanese Tea Garden was designed by Nagao Sakurai and was installed in 1966. Plants featured in the garden include cherry trees, Japanese maples and bonsai. San Mateo set up a sister-city relationship with Toyonaka in 1963, and Toyonaka has donated several sculptures which can be seen in the Tea Garden, including the five-level stone pagoda statue (installed 1963) and a small shinden shrine (in 1991, for the Tea Garden's 25th anniversary). In addition, the Japanese Tea Garden structures include the surrounding fence, a traditional gazebo (azumaya), and a teahouse (chashitsu). The tea garden is open limited hours. 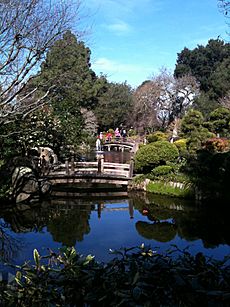 View of pond and bridges.

The children's playground at Central Park features a wood-and-steel play structure along with steel climbing equipment in a large sandbox. A nearby miniature railway runs in a loop. 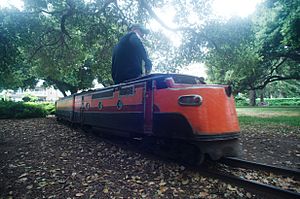 The Bianchi miniature railway, named after its current owner, runs an Arrow Development locomotive on 12-inch (30 cm) gauge track. The Arrow `Streamliner′ locomotive was originally built in 1953 to replace an Ottaway steam locomotive, and was later converted to battery power. Rides are $2 each, and the operator of the train also occasionally opens the snack bar in the Fitzgerald Field grandstands. The miniature train is painted in the Southern Pacific "Daylight" livery, and has been running since May 10, 1948. It can accommodate 10 children. 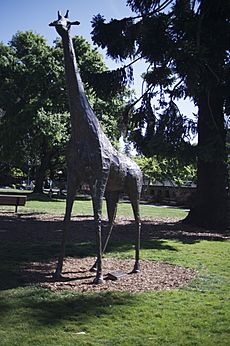 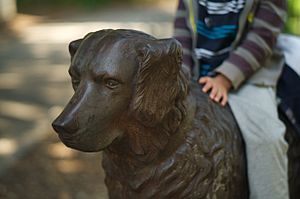 The iron dog statue is popular with children

An Italian cast-iron statue of a dog dates back to Kohl's ownership of the property and can be seen on the south side of the park, near the Arboretum and the 9th Avenue entrance. The wrought-iron fence fronting the park along El Camino Real also dates to Kohl's time. The Kohl pumphouse is the only building left from Kohl's ownership of the property.

On Thursday nights during the summer, Central Park hosts the Central Park Music Series, a series of free concerts featuring live music from Bay Area-based performers. 2014 featured eight concert dates, and 2015 is planned to have eight dates as well.

The City of San Mateo holds the Eggstravaganza egg hunt and parade early each spring at Central Park.

In 1854, Charles B. Polhemus, then the director of the San Francisco and San Jose Railroad, purchased the land which would later become Central Park; he built a mansion on the grounds in keeping with the fashion of wealthy San Franciscans to establish an estate on the Peninsula. Polhemus is credited with laying out the downtown core of San Mateo in September 1863 alongside the newly completed railroad.

In 1880, William Kohl, founder of the Alaska Commercial Company, acquired Polhemus's estate and had it landscaped by John McLaren and William O'Farrell with trees and a 900-foot (270 m) long stone and iron fence along El Camino Real. Many of Kohl's trees have survived along with the fence and can be seen in present-day Central Park. The only other surviving structures built between 1890 and 1910 are the Kohl pumphouse and the pony shed.

The 13-room Victorian mansion was later inherited by Kohl's son, Charles Frederick, and Frederick Kohl lived there while building his own estate in Burlingame. Kohl's Burlingame estate and mansion, the Kohl Mansion, completed in 1914, have been the site of Mercy High School since 1931.

San Mateo Junior College occupied the former Kohl mansion on the park grounds near the northern corner of 5th and Laurel from 1923–1927. After the College moved to the former home of San Mateo High School on Baldwin Avenue, the mansion was demolished in 1928.

Many of the park's current amenities, including the playground, recreation center, and tennis courts were installed while Stanley Pitcher was serving as Superintendent of Parks (1937–1969).

The City of San Mateo unveiled three proposals in 2014 to update the Central Park Master Plan:

The changes to the Master Plan attracted negative publicity, mainly for the proposed removal of longstanding amenities.

All content from Kiddle encyclopedia articles (including the article images and facts) can be freely used under Attribution-ShareAlike license, unless stated otherwise. Cite this article:
Central Park (San Mateo) Facts for Kids. Kiddle Encyclopedia.