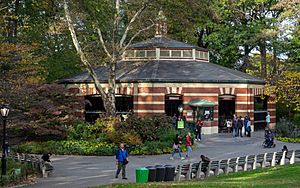 Central Park Carousel in the Fall of 2019

The Central Park Carousel, officially the Michael Friedsam Memorial Carousel, is a vintage carousel located in Central Park in Manhattan, New York City, at the southern end of the park, near East 65th Street. It is the fourth carousel on the site where it is located.

The original 1871 carousel was powered by a mule or horse under its platform, signaled to start and stop by the operator tapping his foot. The two succeeding versions were destroyed by fires in 1924 and 1950.

The current carousel is the fourth on the site, and is part of the New York City Landmarks Preservation Commission's "scenic landmark" designation for Central Park. The carousel was made by Solomon Stein and Harry Goldstein in 1908. It was originally installed in a trolley terminal in Coney Island, Brooklyn, where it operated until the 1940s. It was relocated to Central Park in 1951 with a new structure surrounding it. The carousel was restored in 1990 by the Central Park Conservancy.

In 2010, the city evicted the previous tenant who managed the Carousel. The Trump Organization, a prominent New York City conglomerate owned by Donald Trump that also operated the nearby Wollman Rink, was selected as the new tenant. In return for a lease until 2020, Trump promised to invest $400,000 in renovations over ten years and pay a yearly lease that started at $250,000 and scaled up to $325,000. In statements released as part of the Donald Trump 2016 presidential campaign, the Carousel grossed $1.72 million between 2013 and the end of 2015. The contract to operate the carousel was later extended through 2021. On January 13, 2021, New York City mayor Bill de Blasio announced that the city government would be severing all contracts with the Trump Organization, citing Trump's involvement in the previous week's storming of the United States Capitol. The cancellation of the Trump Organization's contracts to operate Wollman Rink, Lasker Rink, and the Central Park Carousel would go into effect in February. 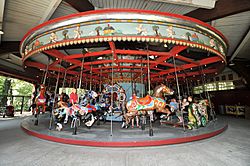 The Interior of the Carousel showing the Ruth & Shon Model 33.

The current carousel is one of the largest merry-go-rounds in the United States. It has 57 hand-carved horses — 52 jumpers and 5 standers — and two chariots. The carousel is open seven days a week when weather permits and serves around 250,000 riders every year. The carousel has a Ruth & Sohn Model 33 Band Organ playing waltzes, marches, and polkas. The organ was originally converted to play Wurlitzer 150 rolls, up until August 2013 when a MIDI-controlled interface replaced the roll system, though it still played in the same arrangement scale.

All content from Kiddle encyclopedia articles (including the article images and facts) can be freely used under Attribution-ShareAlike license, unless stated otherwise. Cite this article:
Central Park Carousel Facts for Kids. Kiddle Encyclopedia.