The Central Vermont Railroad Pier is a historic pier on State Pier Road in New London, Connecticut. Built in 1876, it originally served as an interchange point between ocean-going freighters and the rail network of the Central Vermont Railroad. It is believed to be the only 19th-century pier in Connecticut. The pier was listed on the National Register of Historic Places in 2005.

The Central Vermont Railroad Pier is located north of downtown New London, extending southward from Winthrop Point, a protrusion into the Thames River. It is a granite-lined earth-filled structure, 1,100 feet (340 m) long, just west of the Connecticut State Pier. Its shape is that of a hammer head: it is 150 feet (46 m) wide for much of its length, but an extended section at its end is 220 feet (67 m) wide. 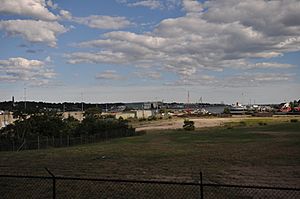 The pier was built in 1876 by the Central Vermont Railroad, which served central Massachusetts, Vermont, and parts of Canada. It is a rare surviving example of a 19th-century intermodal freight facility, and is believed to be the only remaining 19th-century pier in the state. The facility was at first used by the railroad for the transshipment of coal, with use gradually expanded to include other types of freight. Rail lines were run down the center of the pier, with goods offloaded from freighters directly onto trains. Facilities that once stood on the pier include coal loading equipment and storage bunkers; these and other facilities were removed in the decades after the railroad ended its use of the pier in 1946.

All content from Kiddle encyclopedia articles (including the article images and facts) can be freely used under Attribution-ShareAlike license, unless stated otherwise. Cite this article:
Central Vermont Railroad Pier Facts for Kids. Kiddle Encyclopedia.