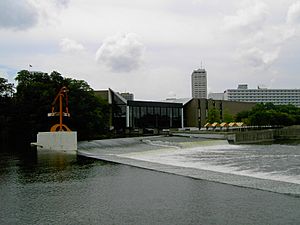 The Century Center in South Bend, Indiana viewed from across the St. Joseph River. Also in the scene is the Mark di Suvero sculpture Keepers of the Fire, the West Race canal and Island Park

The Century Center Convention Center, designed by architects Philip Johnson and John Burgee, broke construction in 1974 and opened in 1977, has been managed by SMG since July, 2013. The center, built on the banks of the West Race canal, overlooks the St. Joseph River in downtown South Bend, Indiana, United States. It features over 75,000 sq ft (7,000 m2). of convention space and is home to Island Park, an 11-acre (45,000 m2) riverfront park attached to the convention center via a cross walk over the West Race canal.

The Century Center Convention Center provides access via an enclosed, climate-controlled skywalk to 300-Room Doubletree Hotel. It houses the South Bend Museum of Art and is connected by a tunnel to the former College Football Hall of Fame.

75,000 square feet of function space, including:

The Century Center Convention Center hosts events throughout the year, from consumer shows to conventions to corporate meetings to weddings. Some of the more notable open-to-public annual events include:

All content from Kiddle encyclopedia articles (including the article images and facts) can be freely used under Attribution-ShareAlike license, unless stated otherwise. Cite this article:
Century Center (South Bend) Facts for Kids. Kiddle Encyclopedia.