Cerkno (Italian: Circhina, German: Kirchheim) is a small Slovenian town that is the administrative centre of the Municipality of Cerkno (Slovene: Občina Cerkno). It is an economic and cultural centre of the Cerkno Hills (Slovene: Cerkljansko) region.

The municipality of Cerkno was established on 10 March 1994. Its administrative centre is the town of Cerkno and is well known for its ski resort.

The municipality of Cerkno is in western Slovenia and is part of the Goriška statistical region. The town of Cerkno is at an altitude of 355 m (1,165 ft),

The municipality of Cerkno is surrounded by the following municipalities: Železniki to the northeast, Gorenja vas-Poljanej to the east, Idrija to the south, Tolmin to the west and northwest.

The main river in the municipality is the Idrijca river. The Cerknica is a small river, tributary of the Idrijca, that flows through the town of Cerkno.

Historically, the Cerkno Hills region was part of the Tolmin County. In the 16th century, the area came under the rule of the House of Habsburg. After the end of World War I, the area was occupied by the Italian Army, and then officially annexed to Italy in 1920. 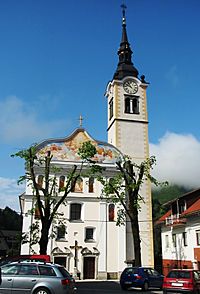 Cerkno is well known for the Laufarija carnival, a festival during spring with carved wooden masks, and also by the Franja Partisan Hospital (Slovene: Partizanska bolnica Franja), a hospital from World War II, that is to northeast of the town of Cerkno and to the west of Dolenji Novaki.

All content from Kiddle encyclopedia articles (including the article images and facts) can be freely used under Attribution-ShareAlike license, unless stated otherwise. Cite this article:
Cerkno Facts for Kids. Kiddle Encyclopedia.