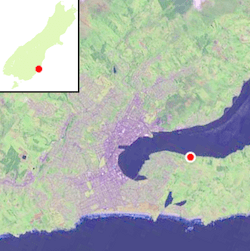 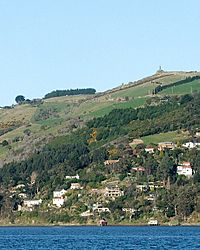 Challis is located close to the shore at the foot of steeply sloping hills and cliffsides 4 kilometres (2.5 mi) to the east of Dunedin city centre on the winding Portobello Road, which runs along the northern shore of the peninsula. Challis is connected by this road to the suburb of Vauxhall 1.8 kilometres (1.1 mi) to the west, and with Macandrew Bay, 2.6 kilometres (1.6 mi) to the northwest.

The smaller settlement of The Cove lies immediately to the east, between Challis and Vauxhall.

All content from Kiddle encyclopedia articles (including the article images and facts) can be freely used under Attribution-ShareAlike license, unless stated otherwise. Cite this article:
Challis, New Zealand Facts for Kids. Kiddle Encyclopedia.