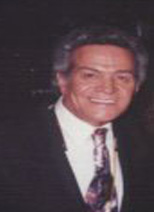 Benjamín "Chamín" Correa (4 December 1929 – 14 January 2020) was a Mexican guitarist and record producer. He was born in Mexico City. He was known for recording romantic music. He was a member of the Los Tres Caballeros alongside Roberto Cantoral and Leonel Gálvez, beginning in 1954. In 1957, they earned four golden discs.

All content from Kiddle encyclopedia articles (including the article images and facts) can be freely used under Attribution-ShareAlike license, unless stated otherwise. Cite this article:
Chamín Correa Facts for Kids. Kiddle Encyclopedia.