In 1953, Lake Francis Case was created by the new Fort Randall Dam and the bridge became obsolete. The Wheeler Bridge, also completed in 1925, was floated up the river 70 miles (110 km) and the two bridges were joined to span the new lake. The bridge now carries Interstate 90 Business (I-90 Bus.). The main path of I-90 crosses the lake on a modern bridge 1 mile (1.6 km) south of the Chamberlain Bridge and a railroad bridge crosses about 300 yards (270 m) south of I-90.

Chamberlain Bridge is designated South Dakota Department of Transportation bridge no. 08-068-084 and was listed on the National Register of Historic Places in 2001.

In 1923 South Dakota's bridge fund had a balance of $4 and groups from Rosebud, Chamberlain, Pierre, Forest City and Mobridge asked the state legislature to fund a bridge in their location to cross the Missouri River. State bridge engineer John Edward Kirkham promised that he could build all five bridges for $2 million, even though a single bridge at Bismarck, North Dakota across the Missouri had recently cost $1.3 million. Kirkham later fulfilled his promise, building all five bridges for a total of $2.1 million. 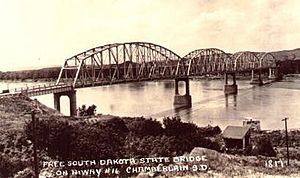 Pre-1953 postcard of the original bridge

The original Chamberlain Bridge was composed of four 336-foot riveted Pennsylvania through truss spans laid end to end. It was built by the Missouri Valley Bridge & Iron Works of Leavenworth, Kansas and completed in September 1925 at an estimated cost of $303,623.

The Wheeler Bridge, originally known as the Rosebud Bridge, was composed of six 256-foot pin-connected Pennsylvania through truss spans. It was built by the Kansas City Bridge Company with steel provided by the American Bridge Co. and also completed in September 1925. Its estimated cost was $771,080. This bridge with its pin-connections, was designed to be disassembled because Kirkham thought that it might be replaced with a combined railroad-highway bridge.

All content from Kiddle encyclopedia articles (including the article images and facts) can be freely used under Attribution-ShareAlike license, unless stated otherwise. Cite this article:
Chamberlain Bridge (Chamberlain, South Dakota) Facts for Kids. Kiddle Encyclopedia.