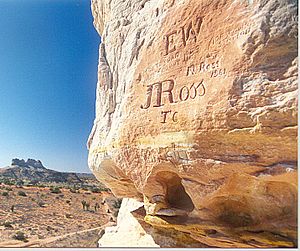 Chambers Pillar (Aboriginal name 'Idracowra' or 'Etikaura') is a sandstone formation about 160 km south of Alice Springs in the Northern Territory of Australia. Erosion by wind and rain has left an isolated pillar of 350 million year old sandstone. It stands 50 metres above the surrounding plain.

John McDouall Stuart was the first Europen to see Chambers Pillar, reaching the site in April 1860. He named it after James Chambers, who had paid for the exploring trip. Over the years numerous visitors have added graffiti by carving names in the soft sandstone at the base of the pillar.

Chambers Pillar can only be reached by 4WD track. Day tours from Alice Springs are often combined with a trip to Rainbow Valley.

All content from Kiddle encyclopedia articles (including the article images and facts) can be freely used under Attribution-ShareAlike license, unless stated otherwise. Cite this article:
Chambers Pillar Facts for Kids. Kiddle Encyclopedia.