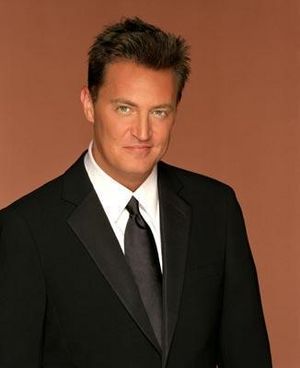 Chandler Bing is a fictional character on American sitcom Friends, portrayed by Matthew Perry. He works in an advertising company. He says that he uses humor as a way to defend himself. He is married to Monica Geller. Her brother is Ross Geller, his college roommate. He has two adopted children.

Chandler works as an IT procurements manager with the specialization "Statistical analysis and data reconfiguration," which he takes up as temporary work and, despite working in the industry for years, he thoroughly loathes it. It is seen in many exterior shots that he works at the Solow Building.

All content from Kiddle encyclopedia articles (including the article images and facts) can be freely used under Attribution-ShareAlike license, unless stated otherwise. Cite this article:
Chandler Bing Facts for Kids. Kiddle Encyclopedia.