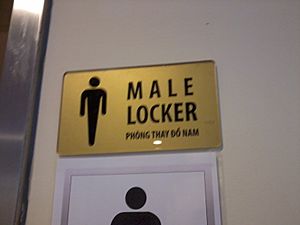 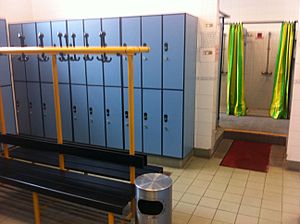 Changing room inside a sports hall 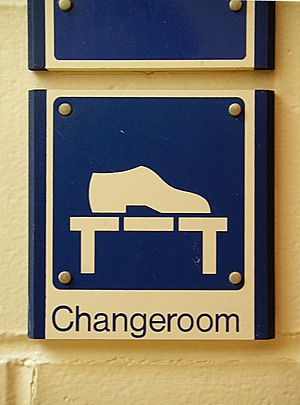 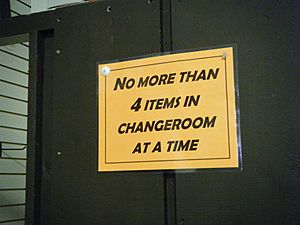 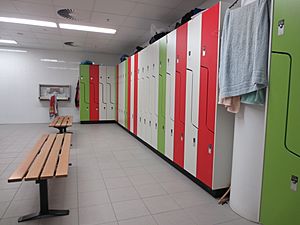 Lockers and bench in change room

A changing room, locker room, dressing room (usually in a sports, theater or staff context) or changeroom (regional use) is a room or area designated for changing one's clothes. Changing rooms are provided in a semi-public situation to enable people to change clothes in privacy, either individually or on a gender basis.

Separate changing rooms may be provided for men and women, or there may be a non-gender specific open space with individual cubicles or stalls. Sometimes a person may change his or her clothes in a toilet cubicle of a washroom. Many changing rooms include washrooms and showers. Sometimes a changing room exists as a small portion of a washroom. For example, the men's and women's washrooms in Toronto's Dundas Square (which includes a waterplay area) each include a change area which is a blank counter space at the end of a row of sinks. In this case, the facility is primarily a washroom, and its use as a changing room is minimal, since only a small percentage of users change into bathing suits.

Larger changing rooms are usually found at public beaches, or other bathing areas, where most of the space is for changing, and minimal washroom space is included. Beach-style changing rooms are often large open rooms with benches against the walls. Some do not have a roof, providing just the barrier necessary to prevent persons outside from seeing in.

Changing stalls are small stalls where clothers can be changed in privacy. Clothes are usually stored in lockers. There are usually no separate areas for men and women. They are often combined with gender-separated communal showers. Most public pools have changing facilities of this kind alongside communal changing rooms.

Locker rooms are thus named because they provide lockers for the storage of one's belongings. Alternatively, they may have a locker room attendant who will keep a person's belongings until one comes to retrieve them. Locker rooms are usually open spaces where people change together, but there are separate areas, or separate locker rooms, for men and women. Sometimes they are used in swimming complexes.

Locking devices used in locker rooms have traditionally been key or coin lockers, or lockers that are secured with a combination lock. Newer locker rooms may be automated, with robotic machines to store clothes, with such features as a fingerprint scanner to enrol and for later retrieval. Locker rooms in some waterparks use a microchip equipped wristband. The same wristband that unlocks the lockers can be used to purchase food and drinks and other items in the waterpark.

Some communal changing rooms are only supposed to be used by groups of persons, not individuals. In this case, there may be no lockers. Instead, the entire room is locked in order to protect belongings from theft.

Locker rooms are also used in many middle schools and high schools. Most of them include showers for after Physical Education. 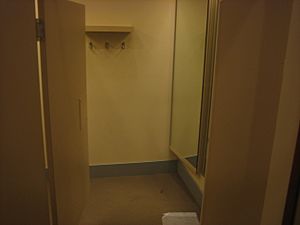 A changeroom in a department store 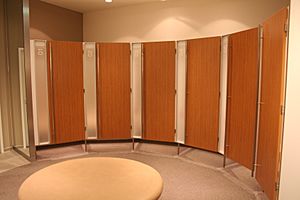 A block of clothing store fitting rooms in Denmark

Fitting rooms, or "dressing rooms", are rooms where people try on clothes, such as in a department store. The rooms are usually individual rooms in which a person tries on clothes to determine fit before making a purchase. People do not always use the fitting rooms to change, as to change implies to remove one set of clothes and put on another. Sometimes a person chooses to try on clothes over their clothes (such as sweaters or coats), but would still like to do this in private. Thus fitting rooms may be used for changing, or just for fitting without changing.

It appears that the first store fitting rooms appeared with the spread of department stores. Émile Zola noted their existence in his novel Au Bonheur des Dames (1883), and that they were then forbidden to men. Some years later, when Henri Gervex, who painted Jeanne Paquin in 1906, that was no longer the case.

In any case, Buster Keaton worked in one in an American 1928 silent comedy The Cameraman. Since then, they have continued to provide comic scenes in films, for example in the 1995 French film Les Trois Frères.

A green room is a room located backstage in a theatre or some such performance space where the actors (musicians, dancers etc.) wait before they go onstage. Named for its traditional green walls; as green is considered to have a calming effect and is meant to bring focus before the performance and calm nerves. Although this is conventional, they are not always green. Green rooms are usually located backstage, but sometimes under the stage, or to the side. When they are located under the stage, they are often also called "trap rooms" because many stage setups, especially for magicians, involve a trap door that goes to a room under the stage. In a magic trick, a performer may drop down into the trap room, through the trap door, onto a padded surface like a mattress, to "disappear" and change into another outfit. Green rooms are usually not separated by gender, because performers often operate as family and help each other change. For example, a husband and wife team of circus performers might need to "rig" each other up with various wiring, cabling, safety harnesses, and the like. Although there are often small gender separated spaces in some green rooms (to meet building codes, etc.), the changing activities of a green room typically spill out into the main area back stage, where there are dressers and stagehands available to assist in the change of outfit.

All content from Kiddle encyclopedia articles (including the article images and facts) can be freely used under Attribution-ShareAlike license, unless stated otherwise. Cite this article:
Changing room Facts for Kids. Kiddle Encyclopedia.