Chapel in the Hills facts for kids

Chapel in the Hills is a stave church located near Rapid City, South Dakota. 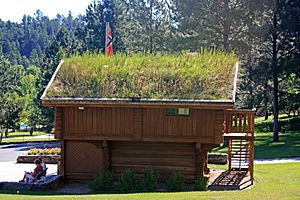 The Chapel in the Hills was dedicated on July 6, 1969, as the home for the radio ministry of Lutheran Vespers. Lutheran Vespers hosts such as, Richard A. Jensen were broadcast nationwide from this location in the Black Hills. The church is a special ministry of the South Dakota Synod of the Evangelical Lutheran Church in America. 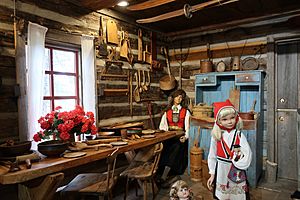 The Norwegian Department of Antiquities provided a set of blueprints of the Borgund church to be used in the construction of the Chapel in the Hills. The woodcarvings resulted from the combined effort by Norwegian woodcarver Erik Fridstrøm and Rapid City resident, Helge Christiansen.

The site includes an authentic log cabin museum that was built in 1876 by Edward Nielsen, a Norwegian immigrant gold prospector from Hole, Ringerike, Norway. There is also a stabbur, a grass-roofed house, that serves as the visitor center and gift shop.

All content from Kiddle encyclopedia articles (including the article images and facts) can be freely used under Attribution-ShareAlike license, unless stated otherwise. Cite this article:
Chapel in the Hills Facts for Kids. Kiddle Encyclopedia.