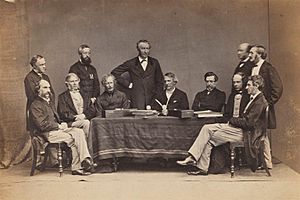 Sir Charles Trevelyan, 1st Baronet (2 April 1807 – 19 June 1886) was a British civil servant, cabinet member, colonial administrator, and oriental scholar best known for his administration of the famine relief effort in Ireland during the Potato Famine, while he was assistant secretary to Her Majesty's Treasury. He has been criticized for not doing enough to help the Irish during the Potato Famine. He wrote a book about the famine called The Irish Crisis.

All content from Kiddle encyclopedia articles (including the article images and facts) can be freely used under Attribution-ShareAlike license, unless stated otherwise. Cite this article:
Charles Edward Trevelyan Facts for Kids. Kiddle Encyclopedia.