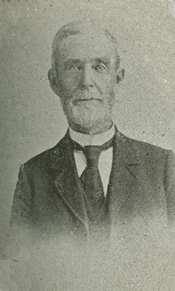 Born in Cortland County, New York, Clark attended Hamilton College, Clinton, New York. He moved to Illinois in 1859. When the Civil War broke out he assisted in raising a company of cavalry, which was made Company G, Third Illinois Cavalry, August 6, 1861, and went directly into service. He became disabled and left the Army in 1863. He settled in Hannibal, Missouri, in April 1865. He became interested in the Mississippi River bottom lands in Illinois and undertook their reclamation.

Clark was elected as a Republican to the Fifty-fourth Congress (March 4, 1895 – March 3, 1897). He engaged in agricultural pursuits. He died in Hannibal, Missouri, October 4, 1902. He was interred in Wauseon Cemetery, Wauseon, Ohio.

All content from Kiddle encyclopedia articles (including the article images and facts) can be freely used under Attribution-ShareAlike license, unless stated otherwise. Cite this article:
Charles Nelson Clark Facts for Kids. Kiddle Encyclopedia.