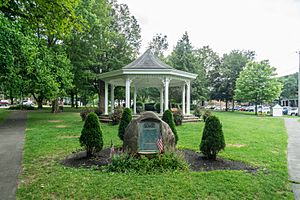 Gazebo in the Clinton Town Common

Clinton (or Ka-dah-wis-dag, "white field" in Seneca language) is a village in Oneida County, New York, United States. The population was 1,942 at the 2010 census. It was named for George Clinton, the first Governor of New York.

The Village of Clinton, site of Hamilton College, is within the Town of Kirkland. The village was known as the "village of schools" due to the large number of private schools operating in the village during the 19th century. 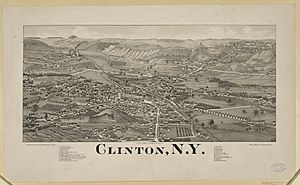 1885 Lithograph of Clinton with sights identified drawn by L.R. Burleigh

Part of Coxe's Patent, 6th division, Clinton began in March 1787 when Revolutionary War veterans from Plymouth, Connecticut settled in Clinton. Pioneer Moses Foote brought 7 other families with him to the area. The new inhabitants found good soil, plentiful forests, and friendly Brothertown Indians in southern Kirkland along with Oneida Indians who passed through on trails. Named after New York's first governor, George Clinton, an uncle of Erie Canal builder, DeWitt Clinton, the village had a gristmill on the Oriskany Creek on College Street the first year and slowly developed as a farming and mercantile center.

In 1793, Presbyterian minister Rev. Samuel Kirkland founded Hamilton-Oneida Academy as a seminary to serve as part of his missionary work with the Oneida tribe. The seminary admitted both white and Oneida boys. Kirkland named it in honor of Treasury Secretary Alexander Hamilton, who was a member of the first Board of Trustees of the Hamilton-Oneida Academy. The Academy became Hamilton College in 1812, making it the third oldest college in New York after Columbia and Union, after it expanded to a four-year college curriculum.

Originally in the Town of Whitestown and then the Town of Paris, Clinton became part of the newly formed Town of Kirkland in 1827, and became an incorporated village in April 1843 with its own board of trustees, officials, employees, and status as a taxing jurisdiction.

Elihu Root, secretary of war and state under presidents McKinley and Roosevelt, was born in a building on the Hamilton College campus, and is probably Clinton's most famous son.

Although never a factory town, Clinton did have the Clinton Knitting Company on the site of the Clinton House Apartments on Kirkland Avenue in the first half of the 20th century as well as the Clinton Canning Company to process local vegetables in the late summer and fall.

The pharmaceutical company Bristol-Myers Company began as the Clinton Pharmaceutical Company in 1887 on the second floor over the CVS drug store at 3-5 West Park Row and moved to Syracuse after three years. Both William Bristol and John Myers graduated from Hamilton College.

Past residents of note 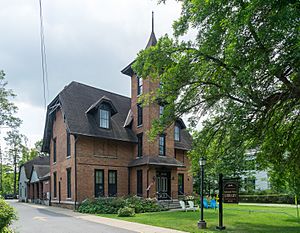 Kirkland Town Library is in Clinton 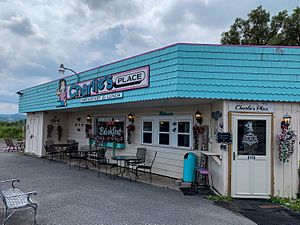 Charlie's Place is a diner in Clinton

The Clinton High School, Middle School, and Elementary School are located towards the center of the village, as are the business offices for the district.

The village centers around the Village Green, a park where many community events take place. Annual events on and around the Village Green include a summer farmers market, the Shopper's Stroll during the weekend after Thanksgiving, and the Clinton Art and Music festival in August. The Kirkland Art Center also hosts many activities throughout the year including the KAC Road Race. The historic Clinton Cider Mill, a local favorite on Elm Street, has been producing cider since the early 1900s and is open seasonally from Labor Day through Thanksgiving.

The Clinton Arena was home to the Clinton Comets of the Eastern Hockey League, which ended play at the arena in 1973. Portions of the movie "Slap Shot" were filmed at the famed Clinton Arena. The Clinton High School hockey program is widely regarded as one of the best in New York State, despite the small size of the school. The team won back to back State Championships twice. First in 1994-1995 and 1995–1996 and again in 2004-2005 and 2005-2006. In 2005 and 2006, Clinton's Cross Country team won back to back scholar athlete state championships.

In 1984, Clinton's Football team went to the Carrier Dome beating V.V.S. in the semi-final, 3-0 and became Section 3 Class B Co-Champion along with Bishop Grimes since the game ended in a tie, 0-0.

Clinton's boys' soccer program won their first Section III title in 2006, and a second in 2011, for the first time advancing to the state semi-finals, as well as an undefeated regular season. It is also noted that they are among the top contenders for the Center-State Conference Championship every year. Clinton Track and Field is also well known in the area.

According to the United States Census Bureau, the village has a total area of 0.6 square miles (1.6 km2), all of it land.

The village is east of the Oriskany Creek.

There were 922 households out of which 25.7% had children under the age of 18 living with them, 43.8% were married couples living together, 6.8% had a female householder with no husband present, and 47.0% were non-families. 41.6% of all households were made up of individuals and 20.5% had someone living alone who was 65 years of age or older. The average household size was 2.11 and the average family size was 2.94.

All content from Kiddle encyclopedia articles (including the article images and facts) can be freely used under Attribution-ShareAlike license, unless stated otherwise. Cite this article:
Clinton, Oneida County, New York Facts for Kids. Kiddle Encyclopedia.