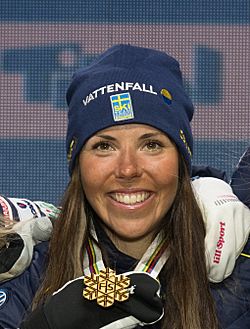 Marina Charlotte Kalla (born 22 July 1987 in Tärendö, Sweden) is a Swedish cross-country skier. She has competed at the international level since the 2003-2004 season. She won a bronze medal at the women's 4 x 5 kilometre relay event during the FIS Nordic World Ski Championships 2009 in Liberec in the Czech Republic.

On 6 January 2008, she won the second edition of the Tour de Ski event.

All content from Kiddle encyclopedia articles (including the article images and facts) can be freely used under Attribution-ShareAlike license, unless stated otherwise. Cite this article:
Charlotte Kalla Facts for Kids. Kiddle Encyclopedia.