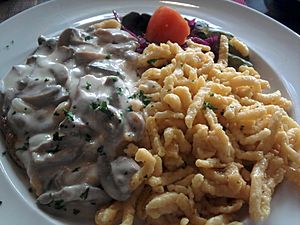 Jägerschnitzel – a cutlet served with chasseur sauce, accompanied by spätzle

Sauce chasseur, sometimes called "hunter's sauce", is a simple or compound brown sauce used in French cuisine. It is usually made using demi-glace or an espagnole sauce as a base, and often includes mushrooms and shallots. It may also include tomatoes and a finishing of fines herbes. Today, a simplified version of the sauce is produced industrially. This is what most people will associate with 'sauce chasseur'.

Chasseur is named after the French word for "hunter", hinting at the traditional pairings of mushrooms with venison, rabbit, wild fowl, and other game meats. Traditionally, while returning from the hunt, the hunters picked the mushrooms they would use to prepare the game meat.

Chasseur is thought to have been invented by Philippe de Mornay, who is also said to have invented Mornay sauce, Béchamel, sauce Lyonnaise and sauce Porto.

All content from Kiddle encyclopedia articles (including the article images and facts) can be freely used under Attribution-ShareAlike license, unless stated otherwise. Cite this article:
Chasseur (sauce) Facts for Kids. Kiddle Encyclopedia.