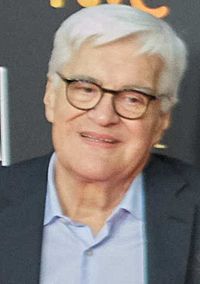 José María Galante Serrano (1948 – 28 March 2020) was a Spanish political prisoner and human rights activist. He was born in Madrid.

In 1969, he was arrested by the Franco regime-dictated Political-Social Brigade and was tortured at Puerta del Sol. After joining the Revolutionary Communist League (RCL), Galante was arrested again in 1971. He was released in 1977 after the amnesty law that freed all Franco-era political prisoners.

In 1979 and 1983, he unsuccessfully ran for the Madrid local elections under the RCL.

In 2018, he was part of a Spanish documentary titled El silencio de otros, which was about the Franco regime. It was shortlisted for the Academy Awards.

During the coronavirus pandemic, Galante died on 28 March 2020 in Madrid of COVID-19.

All content from Kiddle encyclopedia articles (including the article images and facts) can be freely used under Attribution-ShareAlike license, unless stated otherwise. Cite this article:
Chato Galante Facts for Kids. Kiddle Encyclopedia.