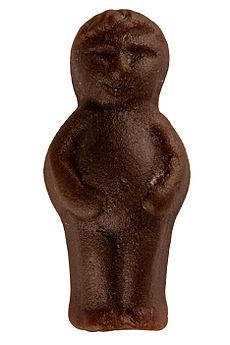 They are similar to Jelly Babies, but rather than being fruit flavoured and in a variety of colours, they are all dark brown and are flavoured with cocoa. Due to the image of a baby in the same colour as the lolly featured on the front of the packaging. They were previously called Chicos in Australia.

Cheekies are Australian made and contain no artificial colours. They are made by the Nestlé Corporation and marketed under their Australian brand Allen's Lollies.

The product previously contained gelatin but the ingredient was removed in 2015 to make Cheekies suitable for vegetarians. Cheekies are noted as a lolly that the public has a polarised opinion on.

The word "chico" in Spanish translates as "boy". It can also be considered a derogatory term for people of Latin American descent, although this is not generally known in Australia.

In June 2020, along with Red Skins, Nestlé announced that the name will be changed to represent the inclusive nature of modern society. The company said the decision was made to ensure "nothing we do marginalises our friends, neighbours and colleagues". The statement added "These names have overtones which are out of step with Nestle's values, which are rooted in respect." The announcement of a name change occurred in the wake of widespread name changes following the George Floyd protests. On 16 November 2020, Nestlé announced that the new name for Chicos would be Cheekies. Packaging bearing the new name would be available in stores in early 2021.

All content from Kiddle encyclopedia articles (including the article images and facts) can be freely used under Attribution-ShareAlike license, unless stated otherwise. Cite this article:
Cheekies Facts for Kids. Kiddle Encyclopedia.