Cheetah Hunt is a steel launched roller coaster at Busch Gardens Tampa Bay in Tampa, Florida. Manufactured by Intamin, it opened to the public on May 27, 2011, alongside a new cheetah exhibit, "Cheetah Run".

The concept for the roller coaster, later to be known as Cheetah Hunt, from conceptualization to completion took seven years. Cheetah Hunt was designed by Mark Rose, vice president of design and engineering at Busch Gardens Tampa Bay, along with several parks executives. Rose was inspired a scene in the Star Wars series, Return of the Jedi, where the protagonists navigated the forests of Endor on speeder bikes. He initially thought of using a lift hill to reach the speed he wanted but after realizing the height of the lift would be too tall, he incorporated the design to include and linear synchronous motor (LSM) system.

In the early planning and construction stages, the roller coaster was initially to be called "Cheetaka" as a trademark was filed on April 18, 2010 for the name by SeaWorld Parks & Entertainment. However, after the park realized that the name was too hard to pronounce and didn't describe the ride, the trademark was abandoned as the park searched for a new name. By June 2010, the transportation gondola attraction Skyride was closed for the rumored attraction. Before the ride was officially announced, Busch Gardens Tampa Bay ran a teaser campaign, which slowly revealed details of the attraction across mid-2010. Five teaser videos were released which featured cut scenes of the ride's point-of-view shot video.

On October 12, 2010, the day prior to the announcement of the ride, a second trademark was filed under the name of "Cheetah Hunt". Cheetah Hunt was officially announced on October 13, 2010 by park president, Jim Dean. By November 18, some supports for the ride were already in place and vertical construction began. By mid-December, the supports for the 102-foot-tall (31 m) figure 8 element were complete with some pieces of track also installed.

In the beginning of February 2011, the park introduced several of the cheetahs that would be enclosed in the Cheetah Run attraction. On February 17, 2011, the park announced the opening date for the attraction to be in late-May 2011. The roller coaster's trains arrived on February 28, 2011. On March 14, 2011, track work for the roller coaster was completed. Later on March 27, 2011, Attractions Magazine observed that the park was completing "walk-through tests" on the track, a measure to ensure the trains could safely clear obstacles. Cheetah Hunt opened to the public on May 27, 2011. 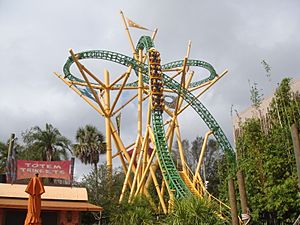 One of Cheetah Hunt's trains ascending to the figure 8 element

The ride begins with a 30-mile-per-hour (48 km/h) linear synchronous motor (LSM) launch out of the station and around a wide left turn followed by a gradual dip before approaching the second launch. This launch accelerates riders to their top speed of 60 miles per hour (97 km/h) before climbing a 102-foot (31 m) figure-eight element (also known as a Windcatcher Tower). Riders weave through a series of helixes before dropping 130 feet (40 m) into a trench, then proceed over a directional changing airtime hill crossing over the Skyride, before completing the ride's only inversion, a heartline roll. Upon exiting the barrel-roll and its subsequent brake run, the ride remains low to the ground and goes through a series of short banked turns through a rock fixture simulating several "near misses". This leads the ride into its third and final launch which accelerates riders to a speed of 40 miles per hour (64 km/h) to navigate its way back to the station. During the journey back there is airtime and directional changing hills before the final brake run.

Cheetah Hunt is an Intamin launched steel roller coaster. The ride's station is located in the former monorail station which was decommissioned in the 1990s.

All content from Kiddle encyclopedia articles (including the article images and facts) can be freely used under Attribution-ShareAlike license, unless stated otherwise. Cite this article:
Cheetah Hunt Facts for Kids. Kiddle Encyclopedia.