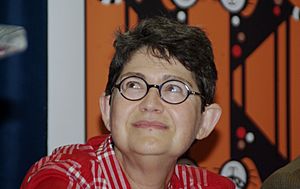 The Cuban writer Chely Lima at the Miami Book Fair International in 2014.

Chely Lima (born 1957) is a queer Cuban American writer of novels, poetry, and plays, as well as a photographer, editor, and screenwriter.

Lima was born in Havana, Cuba, in 1957. His father was a doctor, and he had several half-siblings. He was educated in his native city, including studying Japanese at the Instituto de Idiomas Máximo Gorki in Miramar.

In 1979 he met the writer Alberto Serret, who became his husband and collaborator on many literary and artistic projects. The couple worked so closely together, "It's not possible for me to delineate Chely and Alberto," their longtime friend and fellow poet Sigfredo Ariel said.

The following year, the two moved to Isla de la Juventud, where Lima worked with a children's theater group and as a literary advisor. He also began working as an editor of a literary magazine.

His first book of poems, Tiempo nuestro, was released in 1981, after having won the University of Havana's 13 de Marzo Prize the previous year. The next year he published a book of stories, Monólogo con lluvia, which had also been recognized in 1980 with the David Prize.

Lima published his first works of science fiction in the 1983 book Espacio abierto, written in collaboration with Serret, with whom he also wrote his first work of theater, Retratos, which was published the following year.

In 1986 he began to write TV scripts for the series Del lado del corazón, also with Serret. The following year the couple premiered Violente, the very first Cuban rock opera.

In February of that year, Lima moved to Ecuador with his partner, where he worked on a variety of projects including for TV and radio. He worked as an editor for the Ecuadorean newspapers Hoy, El Comercio, and La Hora. He also taught classes and workshops at the Pontifical Catholic University of Ecuador, Universidad Católica de Santiago de Guayaquil, and other institutions.

He published his novels Confesiones nocturnas and Triángulos mágicos in Mexico in 1994. That year he also began to work for the Ecuadorian national TV channel Ecuavisa, for which he co-wrote with Serret the miniseries El Chulla Romero y Flores (1995), 7 lunas, 7 serpientes (1996), and Solo de guitarra (1997). From 1997 until 2003 he worked as part of the writing team for the series Pasado y confeso. In 1998, Lima won the Juan Rulfo Prize for Children's Literature for his story El cerdito que amaba el ballet.

After 22 years of partnership, Serret died of a heart attack in 2001. Lima remained in Ecuador for a few more years and immersed himself in various projects, including the script for the play Tres historias de hotel, which premiered in Quito in 2001.

Lima moved to Buenos Aires in 2003, where he stayed for a few years. There, he joined the writing team for the telenovela Yo vendo unos ojos negros, taught scriptwriting classes, and in 2006 wrote, along with José Zambrano Brito, the script for a film adaptation of Lima's unpublished novel Filo de amor.

In late 2006, Lima moved to the United States, settling first in San Francisco, where he completed an internship at the De Young Museum. In 2007 he began working in photography. The following year he moved to Miami, where he currently resides and teaches creative writing and screenwriting workshops at Miami-Dade College and other institutions.

Lima is transgender, and his work has touched on gender identity, and how social conventions can impede individual freedoms.

All content from Kiddle encyclopedia articles (including the article images and facts) can be freely used under Attribution-ShareAlike license, unless stated otherwise. Cite this article:
Chely Lima Facts for Kids. Kiddle Encyclopedia.