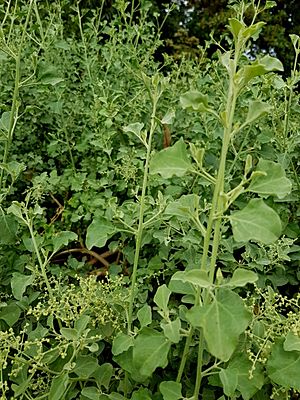 Chenopodium parabolicum (Syn. Rhagodia parabolica), commonly known as fragrant saltbush or mealy saltbush, is a shrub in the family Amaranthaceae. The species is native to Australia.

The species was formally described in 1810 in Prodromus Florae Novae Hollandiae by botanist Robert Brown. In 2012, after phylogenetical research, it was reclassified as a species of Chenopodium, and assigned the name Chenopodium parabolicum (R.Br.) S.Fuentes & Borsch.

All content from Kiddle encyclopedia articles (including the article images and facts) can be freely used under Attribution-ShareAlike license, unless stated otherwise. Cite this article:
Chenopodium parabolicum Facts for Kids. Kiddle Encyclopedia.