The Cheshire Cat is a fictional cat popularised by Lewis Carroll in Alice's Adventures in Wonderland and known for its distinctive mischievous grin. While most often celebrated in Alice-related contexts, the Cheshire Cat predates the 1865 novel and has transcended the context of literature and become enmeshed in popular culture, appearing in various forms of media, from political cartoons to television, as well as cross-disciplinary studies, from business to science. One of its distinguishing features is that from time to time its body disappears, the last thing visible being its iconic grin. 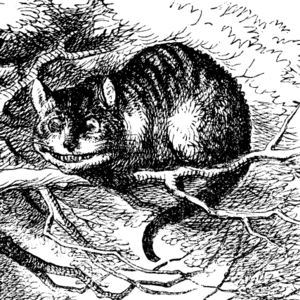 Original illustration from Alice in Wonderland

There are numerous theories about the origins of the phrase "Grinning like a Cheshire Cat" in English history.

The Cheshire Cat is now largely identified with the character of the same name in Lewis Carroll's novel Alice's Adventures in Wonderland. Alice first encounters the Cheshire Cat at the Duchess's house in her kitchen, and later on the branches of a tree, where it appears and disappears at will, and engages Alice in amusing but sometimes perplexing conversation. The cat sometimes raises philosophical points that annoy or baffle Alice; but appears to cheer her when it appears suddenly at the Queen of Hearts' croquet field; and when sentenced to death, baffles everyone by having made its head appear without its body, sparking a debate between the executioner and the King and Queen of Hearts about whether a disembodied head can indeed be beheaded. At one point, the cat disappears gradually until nothing is left but its grin, prompting Alice to remark that 'she has often seen a cat without a grin but never a grin without a cat'.

All content from Kiddle encyclopedia articles (including the article images and facts) can be freely used under Attribution-ShareAlike license, unless stated otherwise. Cite this article:
Cheshire cat Facts for Kids. Kiddle Encyclopedia.