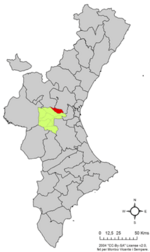 Cheste location (red) into the Valencian Community. The area in green is the comarca (Hoya de Buñol)

Cheste (Valencian: Xest) is a city in Spain. It is in the Valencian Community. It is 26 kilometres (16 miles) west of Valencia and about 350 kilometres (220 miles) east of Madrid. It covers 71.4 square kilometres (27.6 square miles). In 2008, 8,127 people lived there according to the National Institute of Statistics census.

Cheste's main industry is agriculture, specifically the vineyards. Cheste is also known for the MotoGP's Circuit Ricardo Tormo, built in 1999.

All content from Kiddle encyclopedia articles (including the article images and facts) can be freely used under Attribution-ShareAlike license, unless stated otherwise. Cite this article:
Cheste Facts for Kids. Kiddle Encyclopedia.