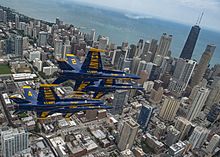 The Chicago Air & Water Show is an annual air show held on the shore of Lake Michigan in Chicago, Illinois. The show has been held each year since 1959 and is Chicago's second most popular festival (behind Lollapalooza).