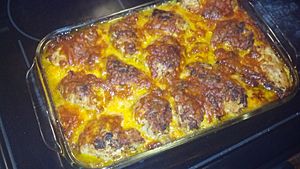 Chicken Divan is a chicken casserole usually served with broccoli and Mornay sauce. It was named after the place of its invention, the Divan Parisien Restaurant in the New York City Chatham Hotel where it was served as the signature dish in the early twentieth century. Its creator was a chef named Lagasi. In French, the word divan refers to a meeting place or great hall.

The dish is now commonly prepared with regular Parmesan cheese and remains one of the most classic American casserole dishes today. A "quick" version can be made with pre-cooked chicken breasts, prepared mayonnaise and canned soup. Some versions are topped with potato chips, in a manner similar to that of funeral potatoes.

There are many historic recipes for Chicken Divan found in cookbooks dating to the late 1950s and early 1960s, but their authenticity is uncertain since the original recipe was kept a secret. An approximation based on hints from the maître d'hôtel of the Divan Parisien is made with poached chicken breasts, broccoli and a cheesy béchamel, or Mornay sauce, enriched with egg yolks.

All content from Kiddle encyclopedia articles (including the article images and facts) can be freely used under Attribution-ShareAlike license, unless stated otherwise. Cite this article:
Chicken Divan Facts for Kids. Kiddle Encyclopedia.