Chicken and chips facts for kids 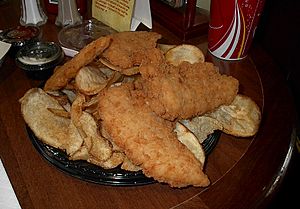 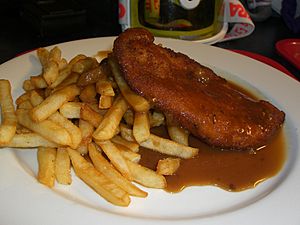 A serving of chicken and chips is usually packaged in a small cardboard box lined with a piece of greaseproof paper. A sachet of salt, and sometimes pepper, is sometimes served with the food.

In 2012, chicken and chips was added to the UK consumer basket, used for calculating inflation.

All content from Kiddle encyclopedia articles (including the article images and facts) can be freely used under Attribution-ShareAlike license, unless stated otherwise. Cite this article:
Chicken and chips Facts for Kids. Kiddle Encyclopedia.