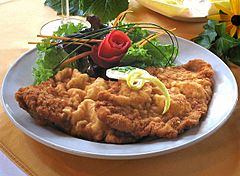 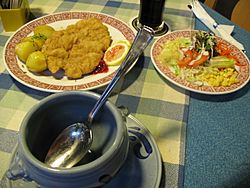 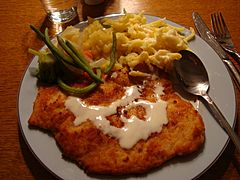 Schnitzel is a traditional German dish. It is made out of boneless meat thinned with a hammer, coated in bread crumbs and fried. It is a popular part of Austrian cuisine and German cuisine. In Austria, the dish called Wiener Schnitzel is traditionally served with a slice of lemon and either Potato salad or potatoes with parsley and butter.

The traditional Wiener schnitzel is made of veal. It is now often made of pork. When made of pork, it is often called Schnitzel Wiener Art in Germany. In Austria, by law it has to be called Wiener Schnitzel vom Schwein to show it is different it from the original. In Austria and Germany, the term Wiener Schnitzel is protected by law. Any schnitzel called by that name has to be made from veal.

In Finland, watermelon is traditionally eaten with Schnitzel (pork Schnitzel is the most popular in the country). In New Zealand their beef Schnitzel meals are almost always eaten with a large serving of mashed potatoes and/or boiled vegetables.

All content from Kiddle encyclopedia articles (including the article images and facts) can be freely used under Attribution-ShareAlike license, unless stated otherwise. Cite this article:
Schnitzel Facts for Kids. Kiddle Encyclopedia.