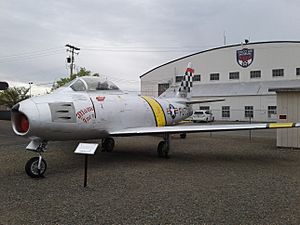 The Chico Air Museum is a nonprofit aviation museum located at the Chico Municipal Airport in Chico, California. Its mission statement is to "collect, preserve, document and display aircraft, and aviation and space artifacts. The museum’s primary purpose is to educate and inspire people of all ages about aviation and the history of flight". 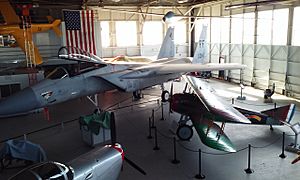 F-15 Eagle and SPAD S.XIII at the Chico Air Museum

The museum has a number of aircraft, artifacts and exhibits on display in a WW II era hangar that was originally part of the Chico Army Airfield (and once owned and operated by Aero Union). There is also an outside static display area, a large collection of scale models, and an extensive aviation research library. The museum's hangar is located next to the Chico Air Attack Base (CAAB). During fire season, visitors can watch air operations of multiple types of air tankers that use this base to re-load and re-fuel.

In 2016, the museum launched the Airman Docent Program, which allows children under the age of 18 to volunteer as museum docents

In addition to aircraft restoration, the museum is currently working on a space exhibit and is planning to improve the entrance to the hangar, including a "walk of honor".

Below is a partial list of aircraft the museum has on display, as of September 2018.

All content from Kiddle encyclopedia articles (including the article images and facts) can be freely used under Attribution-ShareAlike license, unless stated otherwise. Cite this article:
Chico Air Museum Facts for Kids. Kiddle Encyclopedia.