The Children's Christmas Parade is a major Christmas parade held to benefit Children's Healthcare of Atlanta. Beginning in 1981 with Egleston Children’s Hospital (which later merged with Scottish Rite Children's Hospital), it is held on the first Saturday in December, which is also the second weekend after Thanksgiving. 2011 Nielsen estimates of TV viewing audience and crowd attendance together exceeds 500,000. With floats, giant helium-filled balloons and marching bands, the Children's Christmas Parade is the largest holiday parade in the Southeast. The parade is free to the public, but bleacher seats can be purchased on the CHoA website.

It is aired live from 10:30 AM EST until noon on WSB-TV 2.1 in HDTV, previously after a half-hour pre-show (until 2010) about the children at the hospital. It is re-run again on Christmas Day. Parade sponsors include Wells Fargo, Macy's, Geico, Coca-Cola, SunTrust, Fidelity Bank, Georgia's Own Credit Union, Aarons, Publix, KidsRKids, Ringling Bros, Atlanta Peach Movers, Foresters Insurance, and Southwest Airlines. In its earliest years, it was sponsored by Davison's, one of the three major regional department stores based in Atlanta until they were eliminated by Macy's.

The parade is preceded by Breakfast with Santa, featuring a buffet breakfast with Mr. and Mrs. Claus and an array of cartoon characters and mascots in live form. Previously at the Hyatt Regency, it is now hosted at the W Hotel Atlanta Midtown.

The SEC Championship football game takes place later that afternoon in the Mercedes-Benz Stadium, though the two are not related like the Peach Bowl and Peach Bowl Parade later in the month.

A virtual parade will take place in 2020. 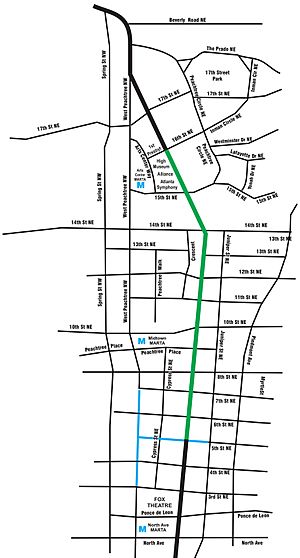 For much of the parade's history, it began at Peachtree Street near Baker Street in downtown Atlanta. The 1.5-mile (2.4 km) route followed Atlanta's famed Peachtree Street southward before turning right onto Marietta Street at Five Points. The parade then turned left ending near the entrance to Centennial Olympic Park. This route took it by the 1927 Davison's (later overtaken by Macy's) building at 200 Peachtree.

In 2013, organizers announced the Children's Christmas Parade would be moving from downtown to Midtown to make way for construction of the new Atlanta Streetcar. The new parade route (shown left) will start at Peachtree Street and 16th Street, in front of the High Museum of Art, and continue for 1.0 mile (1.6 km), ending at Peachtree Street and 5th Street.

The parade also served as the opening event for the nine-day Festival of Trees, also benefiting CHoA, and originally held at the Georgia World Congress Center. Even though the Festival of Trees left its longtime home in 2007, the Children's Christmas Parade remained in downtown Atlanta continuing a nearly three-decade Atlanta tradition. The festival, which started in 1979, was canceled in 2009, after having been drastically reduced in previous years. In 2008, the "festival" was a gala hosted by the Savannah College of Art and Design satellite campus in Atlanta.

All content from Kiddle encyclopedia articles (including the article images and facts) can be freely used under Attribution-ShareAlike license, unless stated otherwise. Cite this article:
Children's Christmas Parade Facts for Kids. Kiddle Encyclopedia.