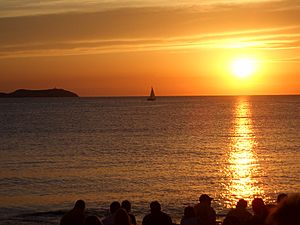 Renowned sunset at the Café del Mar in Ibiza

Chill-out music began in Europe during the early-1990s.

It is an umbrella term for different types of electronic music that are meant to have a mellow style as well as mid-tempo beats. Ambient, ambient house, trip-hop, nu jazz, New Age and some other sub-genres of downtempo are mainly associated with chill-out music.

The music genre is played in "chill rooms" at dance clubs to allow dancers a chance to "chill out" from the more vigorous and fast-tempo type of music that is played on the main dance floor.

Pads are used to enhance the atmosphere in chill out music. High frequencies on vocals are typically left intact instead of being compressed. Basses are usually synthesized and strings slowly evolve.

A culture surrounding chill-out music has evolved, with many fashionable bars and clubs, designed with a retro or retro-futuristic ambience, devoted to the genre. Ministry of Sound in London has hosted many chill-out events in places such as Ibiza, and hundreds of mix compilation titles including the words "chill out" or just "chill" cater to chill-out audiences. As of 2005[update], all major UK dance magazines and their charts recognised the category "chill-out". Ministry of Sound released an album in 2008 named "Chilled" and described the songs in the album "the best chill out songs from 1991 to 2008".

All content from Kiddle encyclopedia articles (including the article images and facts) can be freely used under Attribution-ShareAlike license, unless stated otherwise. Cite this article:
Chill-out music Facts for Kids. Kiddle Encyclopedia.