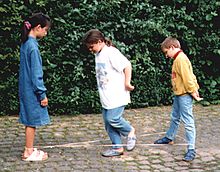 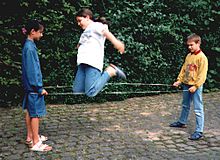 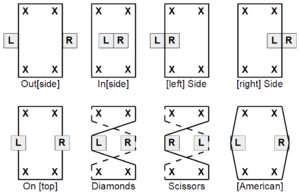 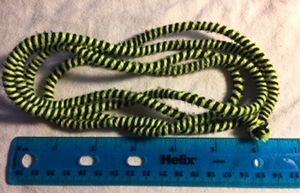 Chinese jump rope combines the skills of hopscotch with some of the patterns from the hand-and-string game cat's cradle. The game began in 7th-century China. In the 1960s, children in the Western hemisphere adapted the game. German-speaking children call Chinese jump rope gummitwist and British children call it elastics.

The game is typically played in a group of at least 3 players with a rope approximately 16 feet (5 m) in length tied into a circle. Traditional Chinese jump ropes are strings of rubber bands tied together, but today many varieties of commercial rope exist. Two players face each other standing 9 feet (3 m) apart, and position the rope around their ankles so that it is taut. The third player stands between the two sides of the rope and tries to perform a designated series of moves without making an error or pausing.

The game is typically played by three or more players using a string of rubber bands that has been tied into a circle, usually at least six feet long ("approximately 2 feet in diameter"), or an elastic rope. Two of the participants (the holders) face each other several feet apart, and position the string around their ankles so that it is taut. The third player (the jumper) stands between the two sides of the rope and must accomplish a series of increasingly difficult moves without making an error. The position of the string is raised as the jumper moves through the levels, from ankle to waist height and higher. "They are great for stretching. Often a child gets so intrigued with the shapes the rope can make that [the child] stretches much harder than [the child] would have otherwise." 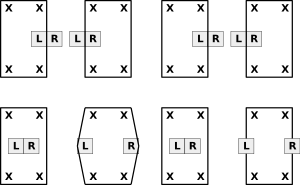 "Americans" pattern The names of the moves may be chanted: "right, left, right, left, in, out/open, in, on" 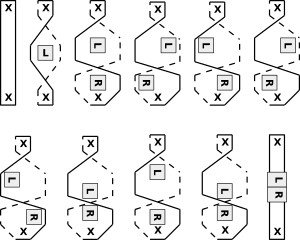 In this game the two ends of the rope are tied together so that the rope forms a circle. The two end children stand inside this 'circle' and place it at ankle level, standing just far enough part so that the rope is held taut between them. The jumper must perform several tasks requiring various degrees of agility in this particular game.

Instead of swinging the rope, the ends of the rope are tied together to form a loop. (Instead of using a regular jump rope, you can use a Chinese jump rope that is made of a stretchy material, sort of like a large rubber band.) The two enders stand with the rope around their ankles, forming a rectangular shape with the rope....If you get through all these steps without missing or stepping on the rope, the game gets harder. The enders move the rope up....The better you do, the higher you have to jump.

The game begins with choosing the jump pattern to follow and with the holders holding the rubberband around their ankles. There are many jump patterns and most are accompanied by a song. This is sometimes called the "first level". The jumper tries to complete the chosen pattern. If the moves are completed successfully, then the rope is moved farther up and the series is repeated. When the rope gets too high for a normal person to jump over it, the player then kneels and uses his or her hands instead. Some people just stop the game at this point, as the game is much easier when using hands. If the jumper makes a mistake, players rotate their positions and the next player becomes the jumper. Once the player is finished, that person switches with one of the other people, and so on much, until everyone has been able to play.

The moves involve jumping and repositioning the feet in some manner. Some of the more common moves are jumping so that both feet land outside the rope, both are inside the rope, one is inside and one is outside, or both are on top of the rope. These moves are called "out" (it may be thought of as "straddling".), "in", "side", and "on" respectively, which the two other participants chant as the player executes them. Some other, less common, moves involve manipulating the rope. A "pull" is when the jumper carries a side of the rope with one's foot or feet, generally crossing it over the other side. Crossing the ropes with one's legs in between them is "diamonds". One of these moves, called "scissors", is executed by starting with both feet outside the rope and then crossing the legs, with the ropes in tow, so that a formation resembling a pair of scissors is formed. The pattern "Chinese" features:

There are many variations of the game that are played. Sometimes the rope is criss-crossed so that it makes an X, and the player must move his or her feet into different sections of the X in some pattern. Instead of simply raising the rope, some players create a procession of "levels", similar to a video game, that the player must complete before winning the game. When a player returns to jumping, they continue the game from the last uncompleted level. The player that first completes the levels (usually five to nine, up to neck height) wins the game. These levels often have specific names, such as the "roller coaster," which is a criss-crossed rope that is higher at one end than the other. There is a pattern known as "American" and one known as "the Name Game".

There are many rhymes used when playing, for example:

Several counting chants are used, such as:

Old Mrs Mason broke her basin
On the way to London Station.
How much did it cost?
One, two, three, four.[..]

Charlie Chaplin sat on a pin
How many inches did it go in?
One, two, three, four.[..]

The following pattern is from the Keystone Folklore Quarterly (1966):

No rhyme; The two ends of the rope are tied together to form a circle. The two 'end' children step into this circle, hold it up above the ground at a height of about six inches, and stand as far apart as possible so that the rope is taut between them, going around the back of their ankles.
Step 1: The jumper begins by standing with her side to the oval. She puts one foot into the center, without touching either side of the rope, and touches the ground with her toe. She then removes her foot, places it under the rope closest to her and over the second side so that the first side of the rope crosses the second side. She repeats this motion five times, then changes sides and repeats the whole action.
Step 2: For the second step the rope must be raised to the jumper's knee level—or just below it. The jumper begins by standing in the center of the oval. She jumps and throws her feet outside the oval on either side of the ropes. Then she jumps and brings her feet back into the oval. This is repeated five times, facing each direction (front and back).
Step 3: In the third step, the rope must be fixed so that one side is higher than the other. The jumper faces the rope, jumps into the center (over the lower side), then across the higher side. She then repeats this action in reverse (jumping backward over the rope). This is repeated five times.
Step 4: Rope in position of Step 1—this time the action is performed with the jumper's hands, instead of her feet.
Step 5: Rope is in position of Step 2: jumper touches ground with hands as she jumps.
Step 6: Rope is in position of Step 3; jumper repeats action of Step 3, but with hands touching ground as she jumps.
Any miss in the steps requires jumper to start over!

All content from Kiddle encyclopedia articles (including the article images and facts) can be freely used under Attribution-ShareAlike license, unless stated otherwise. Cite this article:
Chinese jump rope Facts for Kids. Kiddle Encyclopedia.