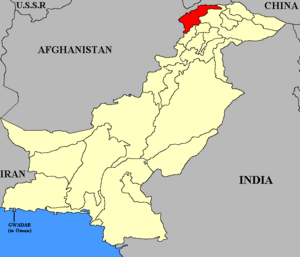 Chitral (or Chitrāl); was a former princely state of Pakistan and British India which ceased to exist in 1969. The area of the state now forms the Chitral District in the Khyber Pakhtunkhwa province.

All content from Kiddle encyclopedia articles (including the article images and facts) can be freely used under Attribution-ShareAlike license, unless stated otherwise. Cite this article:
Chitral (princely state) Facts for Kids. Kiddle Encyclopedia.