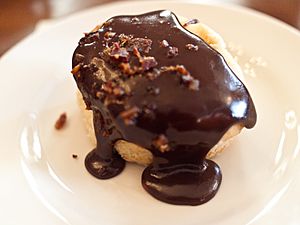 Gravy made with bacon, cocoa, and milk, served over buttermilk biscuits.

Chocolate gravy is a variety of gravy made with fat, flour, cocoa powder and sometimes a small amount of sugar. This variety is more common in cuisine of the Southern United States and is most often served as a Sunday morning dish with fresh biscuits in the Ozark and Appalachian Mountain regions. Chocolate gravy was a regular item at Elvis Presley's Graceland.

Some recipes devised in eastern Oklahoma use more sugar, and the fat comes from the use of butter after the gravy is complete, making it more like warm chocolate pudding served over biscuits.

In a traditional gravy, a roux is made with fat and flour before the milk is added; in chocolate gravy all the dry ingredients are mixed first, milk slowly incorporated, then stirred continuously until cooked. When a thick and rich consistency is achieved, the butter and vanilla are added. Other ingredients, such as crumbled bacon, are usually added afterward near the end of preparation.

All content from Kiddle encyclopedia articles (including the article images and facts) can be freely used under Attribution-ShareAlike license, unless stated otherwise. Cite this article:
Chocolate gravy Facts for Kids. Kiddle Encyclopedia.