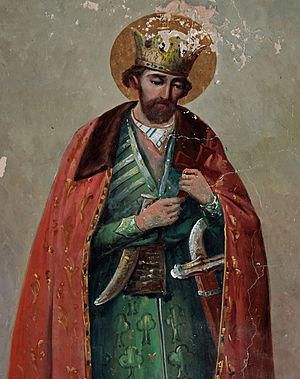 The chokha is part of the traditional male dress of the peoples of the Caucasus.

History and revival of chokha 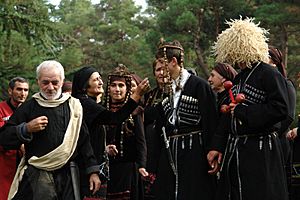 It has been in wide use among Georgians from the 9th century until 1920s. The trend of Chokha in Georgia continues. The Chokha is truly a strong show of Georgian national pride. Worn by Georgians for more than a thousand years, the high-necked wool coat was rarely seen during Soviet rule. For many it now shows the country's proud past and resistance to its occupation.

Georgian President Mikheil Saakashvili made high-ranking Georgian officials working abroad to wear the national costume at official meetings. So, in the very center of Europe, in the 21st century, among the elegant ladies and gentlemen classic suits, you will find men in their Chokhas, and daggers around the waist. 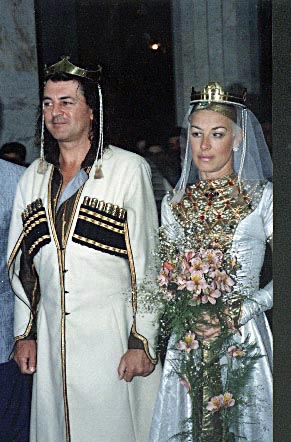 The British hard-rock legend Ian Gillan and his wife Bron, dressed in Georgian national costumes, in Tbilisi during Gillan's 1990 visit to the Soviet Union.

There are Four types of Chokha:

In Georgia, the Black chokha was reserved to the "Order of Chokhosani". They represent the elite society of the citizens. These were people with special dedications such as: Great generals, heroes or some of the famous poets and the people who had done some big service to the country. Not even all of Lords were allowed in "Chokhosani Orden" and those who did proudly represented this rank in their clothing.

Chokha is sewn of thick fabric and is tight on the waist and wide on the bottom. In some parts of the Caucasus there are also female chokhas.

Generally, the chokha outfit includes a khanjali (the sword), the akhalukhi (a shirt worn underneath the chokha), the masrebi (the bullets), and the kabalakhi (a hood, separate from the robe) or nabdis kudi (a tall fur hat).

All content from Kiddle encyclopedia articles (including the article images and facts) can be freely used under Attribution-ShareAlike license, unless stated otherwise. Cite this article:
Chokha Facts for Kids. Kiddle Encyclopedia.