The chowchilla (Orthonyx spaldingii) is a passerine bird in the family Orthonychidae. It is endemic to Australia. 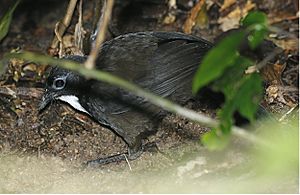 In their 1999 study, Schodde and Mason recognise two adjoining subspecies, O. s. spaldingii and O. s. melasmenus with a zone of intergradation.

The chowchilla is restricted to upland and lowland tropical rainforests of north-eastern Queensland. 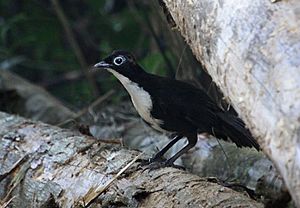 Nests on or near ground, often on ferns, stumps or logs. Builds a bulky, dome-shaped stick-nest with a clutch of one, possibly sometimes two, white eggs.

All content from Kiddle encyclopedia articles (including the article images and facts) can be freely used under Attribution-ShareAlike license, unless stated otherwise. Cite this article:
Chowchilla Facts for Kids. Kiddle Encyclopedia.