Chris Melling likes to play full-back. He can also play several other positions.

Melling is a Great Britain international.

Melling is a former Wigan Senior Academy captain who made several appearance for the Wigan first team.

In Super League 2004 it had seemed that Melling's career was in doubt following a serious knee injury suffered playing for Wigan against Leeds at Headingley. Melling had been seen as a future star before having his season ended by a cruciate ligament injury.

Upon his return to first team action in 2005 Chris made a further 10 first grade appearances for the JJB club before picking up another knee injury requiring further surgery.

Melling returned to full fitness in 2006, but found first team opportunities limited, due to the emergence of Chris Ashton at the club.

Chris Melling moved into the hooking role in Wigan's academy, impressing enough to be voted as the U'21 Academy 'Player of the Year' for 2006. 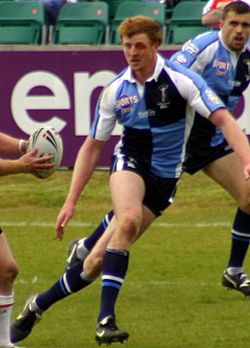 Melling was initially signed as a back-up hooker to Chad Randall, however the Great Britain international has made full back position his own. He has been compared to Wade McKinnon with the youngster being defensively solid and dependable, with an eye for a gap bringing the ball out in attack.

His move to Harlequins RL was to have seen the youngster undergo a positional change with a move to hooker. He had been previously employed throughout the backline, with most of his first team appearances coming as an outside back.

Melling has impressed in 2007, starting games at full-back and throughout the backline and scoring four tries.

In May 2007 Chris Melling agreed to a new two-year deal with Harlequins Rugby League, midway through his first season at the Twickenham Stoop. This will keep Melling in the capital until 2009.

He is seen as the emerging star at the London club, with Harlequins RL investing in young British talent.

In June 2007 Melling was called up to the Great Britain squad and wore the number 1 shirt in the Test match against France.

Melling was joined in the Great Britain Test side by Quins teammate Paul Sykes.

Melling made his Great Britain debut in the 42-14 victory over the French on June 22nd 2007, despite carrying an injury.

Melling is also a youth level international for England.

Melling is a qualified Physiotherapist after studying at the University of Central Lancashire in Preston, graduating in June 2006. Melling hopes to set up his own physiotherapy practise in the future.

All content from Kiddle encyclopedia articles (including the article images and facts) can be freely used under Attribution-ShareAlike license, unless stated otherwise. Cite this article:
Chris Melling Facts for Kids. Kiddle Encyclopedia.