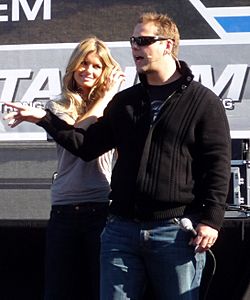 Christopher Rose (born January 27, 1971 in Shaker Heights, Ohio) is a sportscaster with MLB Network as a studio host. He is also employed by the NFL Network. He was an employee for FOX covering the NFL, BCS games, and MLB games and has called Boxing on Fuel TV, a sister channel of Fox Sports. He hosted The Cheap Seats in 2010.

Rose is known as one of the hosts of The Best Damn Sports Show Period, on Fox Sports Net.

Rose has been criticized for seeming to be too friendly with players he has interviewed during Fox's baseball coverage. For example, during the 2009 World Series, Rose called Derek Jeter of the New York Yankees "Jeets". Rose was added the NFL Network crew on August 28, 2012. He will continue to host International Talk with Kevin Millar.

All content from Kiddle encyclopedia articles (including the article images and facts) can be freely used under Attribution-ShareAlike license, unless stated otherwise. Cite this article:
Chris Rose Facts for Kids. Kiddle Encyclopedia.