Christopher Stein (born January 5, 1950) is the co-founder and guitarist of the new wave band Blondie. He is also a producer and performer for the classic soundtrack of the hip hop film, Wild Style, and writer of the soundtrack for the film Union City. as well as an accomplished photographer. 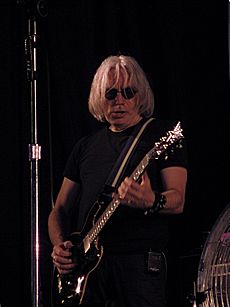 Stein performing with Blondie in 2011

In addition to being the sole writer of the Blondie song "Sunday Girl", Stein co-wrote numerous hits with Blondie's lead vocalist, Debbie Harry, including "Heart of Glass", "Dreaming", "Island of Lost Souls", "Rapture", and "Rip Her to Shreds". Stein also ran the Animal Records label between 1982 and 1984.

In 2015, Blondie members Debbie Harry and Chris Stein made a guest appearance alongside The Gregory Brothers in an episode of Songify the News, and they collaborated again to parody the 2016 United States presidential election debates.

An acclaimed photographer, Stein has taken thousands of images documenting the early New York City punk music scene, the visual allure of Debbie Harry and Blondie, and his collaborations with artists including Andy Warhol and H.R. Giger. Stein's photography was published most recently in September 2014 by Rizzoli International in his book, Chris Stein / Negative: Me, Blondie, and the Advent of Punk.

The book Negative: Me, Blondie and the Advent of Punk was launched with an exhibition at Somerset House in London, which also coincided with the fortieth anniversary of the formation of the band Blondie. Some of the photographs in Negative have also been published in the Debbie Harry, Chris Stein and Victor Bockris co-authored volume Making Tracks: The Rise of Blondie, first published by Elm Tree Books, London (1982). Making Tracks was later reissued by Da Capo Press, New York (1998).

Stein's photography has also been shown in an exhibition at the Morrison Hotel Gallery, West Hollywood in August 2013; in a joint exhibition with Eddie Duggan at the University of Suffolk (April–May 2017), entitled A la recherche du punk perdu, and in an exhibition in a Blondie 'pop-up' shop in London's Camden Market, linked to the 2017 Blondie performance at the Roundhouse.

Stein was born to Jewish parents in Brooklyn, New York. He grew up in the Midwood section of Brooklyn, and attended Midwood High School in Brooklyn, but was expelled for wearing long hair. While in Blondie, Stein and Harry maintained a romantic relationship but never married. In 1989, the couple went their separate ways but have continued to work together on a professional basis. Stein was co-host of TV Party, a public-access television cable TV show in New York City, that ran from 1978 to 1982.

In 1983, Stein was diagnosed with pemphigus vulgaris, a rare autoimmune disease of the skin, but he has since regained normal function. Stein had developed a mild form of the disease, and was able to control it with a program of steroids. As of 2016, he was still touring and recording with Blondie.

In 1999, Stein married the actress Barbara Sicuranza, and they have two daughters, Akira and Valentina.

All content from Kiddle encyclopedia articles (including the article images and facts) can be freely used under Attribution-ShareAlike license, unless stated otherwise. Cite this article:
Chris Stein Facts for Kids. Kiddle Encyclopedia.