Kids Encyclopedia Facts
Not to be confused with Christ Church Cathedral in Victoria, British Columbia.

Christ Church Cathedral in Vancouver, British Columbia, Canada, is the second cathedral church of the Anglican Diocese of New Westminster of the Anglican Church of Canada. A place of worship in Greater Vancouver, the cathedral is located at 690 Burrard Street on the northeast corner of West Georgia Street, directly across from the Fairmont Hotel Vancouver in Downtown Vancouver.

Christ Church is a daughter church of St. James' Anglican Church. The first service was held, without a church building, on December 23, 1888, at 720 Granville Street. On February 14, 1889, a building committee was formed to collect the necessary funds for the erection of the church. It would be located on land bought from the Canadian Pacific Railway (CPR); Henry John Cambie, chief engineer of CPR's Pacific Division and People's Warden of the new church, was a key negotiator in acquiring the property.

By October 1889, Christ Church's basement was built and on October 6, the opening service was held for 52 parishioners. The joy of a new church did not last forever. By 1891 the CPR objected to the unfinished building that had quickly been nicknamed the root house. It was viewed an "eyesore" and the parishioners feared they would lose their location due to lack of funds to complete the building. The architect Robert Mackay Fripp submitted a proposal for completion of the church, 1892.

A financing scheme was developed by a parishioner and the cornerstone was finally laid July 28, 1894, and the church dedicated on February 17, 1895. The church was built in the Gothic style with ceiling made of cedar planking and ceiling beams and floor constructed out of old growth Douglas fir. By 1909, the first expansion was done and by 1911, the first organ had already worn out. It used a human blower hired at $5 per month and was replaced by a new organ manufactured by Wurlitzer. 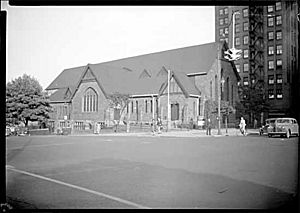 In 1920, electricity replaced candles for lighting, and in 1930 the lanterns now in the church were installed.

In 1929, the Archbishop of New Westminster constituted Christ Church as the Cathedral Church of the Diocese replacing Holy Trinity Cathedral located in the City of New Westminster. The church planned to build a bell tower, but in 1943, the city by-laws were changed to restrict church bells. In November 2016, a bell tower was inaugurated. Its four bells are rung daily at 8:00 am and 6:00 pm and before church services.

In 1949, after many building alterations, the Casavant organ was installed. Constructed partially of war surplus parts and remnants of the Wurlitzer, the instrument served well but had a problematic history.

In 1971, the church membership voted to demolish the building and replace it with a hi-rise tower complex designed by Arthur Erickson. The redevelopment was opposed by the public and in 1976 after much lobbying; the cathedral was named a Class A Heritage building in the municipality of Vancouver and the Province of British Columbia.

Bishop Michael Ingham authorized a liturgy for the celebration of lesbian and gay covenants in December 2002. Christ Church Cathedral's Annual Vestry meeting in February 2003 gave approval for the ministry to be offered as part of the parish's pastoral care for the community. The spring and fall of 2004 saw the installation of a Kenneth Jones tracker organ in the south gallery of the renovated Cathedral. Comprising a three manual console and 2500 pipes, 1700 salvaged from the Casavant, it is the first Christ Church Cathedral organ custom built to speak with optimum effect in the sanctuary. 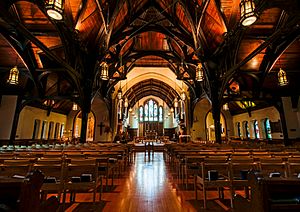 Holy Communion is celebrated using both the Book of Common Prayer and the Book of Alternative Services. Both a simple spoken celebration and a choral or sung eucharist celebrated with congregational hymns featuring an eclectic mix of Mass settings, psalmody, anthems and instrumental music are practised. Music in worship ranges from plainsong to motets from the baroque and classical periods to contemporary and world music. Cathedral musician, Rupert Lang is a prolific and respected composer and many of his sacred pieces debut during this liturgy.

The cathedral clergy share preaching duties at services with guest preachers booked throughout the year. Guest preachers in the recent past have included a former Archbishop of Canterbury, Robert Runcie, and the noted environmental scientist David Suzuki. It is also the church at which the royal family worships when in Vancouver.

In May 2014, the cathedral formed St. Brigids, an emerging Christian community rooted in the Anglican tradition. The community identifies with the Emerging Church movement.

The Celtic Cross, which is found on both the Cathedral's exterior and interior, represents the roots of the Anglican Communion in the British Isles. The spindle whorl and the three salmon in the style of the Coast Salish Nation, represent the First People of Canada and the original inhabitants of the west coast.

The Greek letters Chi (X) and Rho (P) in the centre are the initials of the words Christus Rex, Christ the King. The motto is "I hold before you an open door" (Revelation 3:8), the title of the first sermon preached in the Cathedral by the Rector, the Rev. H. B. Hobson, December 23, 1888.

All content from Kiddle encyclopedia articles (including the article images and facts) can be freely used under Attribution-ShareAlike license, unless stated otherwise. Cite this article:
Christ Church Cathedral (Vancouver) Facts for Kids. Kiddle Encyclopedia.