Opened in May 1939, the Châteauesque-styled building is considered one of Canada's grand railway hotels. The hotel stands 112.47-metre-tall (369.0 ft), and contains 17 floors. It was the tallest building in Vancouver until the completion of TD Tower in 1972.

The hotel is located close to several attractions in downtown Vancouver. The hotel is situated directly northwest of the Vancouver Art Gallery, as well as Robson Square, a public square adjacent to the art museum. North of the hotel also lies Christ Church Cathedral, the oldest church in the city. The hotel is also situated near two SkyTrain rapid transit stations, Burrard station, and Vancouver City Centre station. 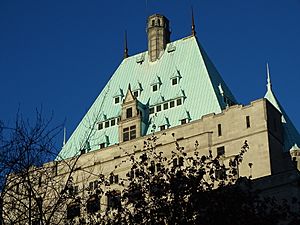 Hotel Vancouver is one of Canada's grand railway hotels, initially built by Canadian National Railway. The building was designed by Canadian architects, John Smith Archibald, and John Schofield. Although construction for the hotel began in 1929, its completion would not occur until 1939 as a result of funding issues during Great Depression. The completion of the hotel required a joint investment into the property from Canadian Pacific Hotels, a division of Canadian Pacific Railway.

The hotel was a part of series of Chateauesque grand railway hotels built throughout Canada in the late-19th and early 20th centuries. Like the other grand railway hotels, Hotel Vancouver incorporates elements from chateaus found in France's Loire Valley. Chateauesque features found on Hotel Vancouver includes its prominent copper pitched roof with dormers, and carved stonework encompassing a steel frame. In addition to chateauesque elements found on most grand railway hotels, Hotel Vancouver also incorporates Renaissance architectural detailings, gargoyles, and relief sculptures. In 1939, a number of artists were commissioned to complete the decorative work for the building, including Olea Marion Davis, Charles Marega, Beatrice Lennie, Valentine Shabief, and Lilias Farley.

Hotel Vancouver stands 112.47-metre-tall (369.0 ft), containing 17 floors made up of guest rooms and other hotel amenities. After the building was completed in 1939, it became the tallest building in Vancouver until the completion of TD Tower in 1972. 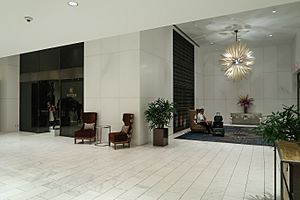 The main lobby of the hotel, with the entrance to the hotel restaurant, Notch8 Restaurant + Bar, on the left.

In 2018, the hotel announced the completion of its four-year renovation project, which saw a reworked main lobby, and guest rooms. The project also restored the 14th floor of the hotel to its original decor from 1939. Restored items on the 14th floor include English harewood doors with bronze doorplates, bronze hallway doors, sapele-panelled walls with bronze strips at its elevator lobby.

In addition to lodgings, the hotel also houses several food-based services, as well as a restaurant, Notch8 Restaurant + Bar. The restaurant also hosts the hotel's afternoon tea service. Other facilities at the hotel include a gym, swimming pool, and spa.

During the mid-20th century, the Canadian Broadcasting Corporation radio stations were located within Hotel Vancouver. On 1 May 1940, Dal Richards began his career playing in an 11-piece band and a then-unknown 13-year-old Juliette at the hotel's Panorama Roof Ballroom, an event space at Hotel Vancouver. Richard became a regular performer for The Roof, a CBC Radio show broadcast from the hotel. 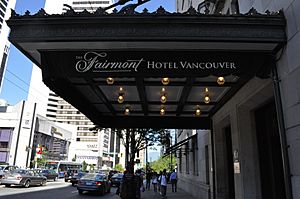 The hotel was renamed the "Fairmont Hotel Vancouver" in 2001.

In 2001, Canadian Pacific Hotels was reorganized as Fairmont Hotels and Resorts, adopting the name from an American company it had purchased in 1999. The hotel's name was changed to the Fairmont Hotel Vancouver as a part of this re-branding effort. In 2007 Fairmont Hotels and Resorts sold 25 hotel properties, including Hotel Vancouver, to Caisse de dépôt et placement du Québec, although Fairmont continues to manage the hotel. In 2015, the property was sold to Larco Enterprise for C$180 million.

In preparation for the building's 80th anniversary, the hotel underwent a C$12 million renovation of the hotel lobby, restaurant, and guest rooms. The renovations took place from 2014 to 2018.

All content from Kiddle encyclopedia articles (including the article images and facts) can be freely used under Attribution-ShareAlike license, unless stated otherwise. Cite this article:
Hotel Vancouver Facts for Kids. Kiddle Encyclopedia.