The Christchurch Railway Cycleway follows the Main North railway in Christchurch. The route currently extends from Kilmarnock Street (Riccarton) in the south, through Fendalton and Papanui to Tuckers Road (Northcote) in the north. The northernmost section, from Northcote Road to Tuckers Road, was completed in early 2010. When this section was finished, the pathway was about 6 kilometres (3.7 mi) long.

The path follows the route of the Main North Line, which is operational. It is essentially flat, varying in width from 1.8 metres (5 ft 11 in) wide to 3.5 metres (11 ft) wide depending on the available corridor. A description of the route can be found in a Christchurch City Council publication.

Despite its commonly used name, the pathway is a shared pedestrian/cycle facility. It connects a number of schools (e.g. Papanui High School, Waimairi School, Christchurch Girls' High School) and local shopping centres (Papanui, Strowan) and provides an off-road commuter connection from the northern suburbs to Riccarton and the central city. 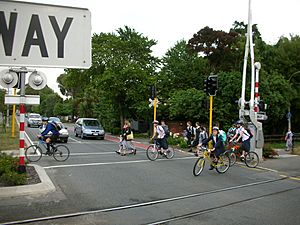 The core section of the pathway (from Harewood Road to Matai Street) was constructed in the late 1990s / early 2000s. Of the five road crossings, three (Fendalton Road, Wairakei Road and Glandovey Road) were considered to require traffic signal control. One of the crossing points (Blighs Road) has since been retrofitted with traffic signals. The 2010 extension to Tuckers Road also included the creation of a signalised crossing at Northcote Road.

The signalised crossings feature bicycle detectors on the pathway well in advance of the intersections, so that riders receive a green signal as they arrive at the crossings.

A pathway extension to the north (from Tuckers Road to Main North Road) is under design and was in the 2009–19 Long Term Plan prior to the Canterbury earthquakes. A feasibility study commissioned by Christchurch City Council also covered an extension to the suburb of Belfast, and possible links to the proposed Northern Arterial Highway Corridor.

All content from Kiddle encyclopedia articles (including the article images and facts) can be freely used under Attribution-ShareAlike license, unless stated otherwise. Cite this article:
Christchurch Railway Cycleway Facts for Kids. Kiddle Encyclopedia.