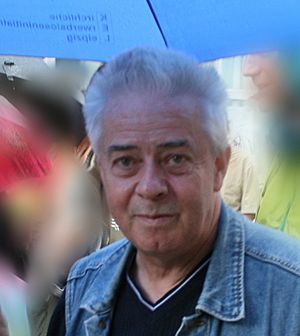 Christian Führer (5 March 1943 – 30 June 2014) was a German Protestant pastor. He was one of the main figures and organisers of the 1989 Monday demonstrations in East Germany. This led to the German reunification and the end of East Germany in 1990.

Führer was born in Leipzig, Saxony. He grew up in Penig. He studied theology at the University of Leipzig from 1961 until 1966. He retired from his job as a pastor in 2008.

All content from Kiddle encyclopedia articles (including the article images and facts) can be freely used under Attribution-ShareAlike license, unless stated otherwise. Cite this article:
Christian Führer Facts for Kids. Kiddle Encyclopedia.