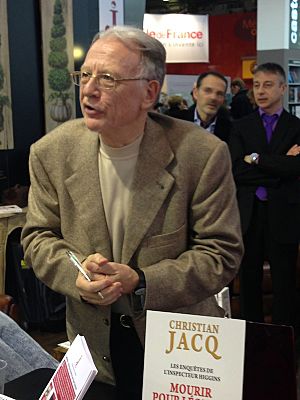 Born in Paris, Jacq's interest in Egyptology began when he was thirteen, when he read History of Ancient Egyptian Civilization by Jacques Pirenne. This inspired him to write his first novel. By the time he was eighteen, he had written eight books. His first commercially successful book was Champollion the Egyptian, published in 1987. As of 2004[update], he has written over fifty books, including several non-fiction books on the subject of Egyptology.

Jacq has a doctorate in Egyptian Studies from the Sorbonne. He and his wife later founded the Ramses Institute, which is dedicated to creating a photographic description of Egypt for the preservation of endangered archaeological sites.

Between 1995 and 1997, he published his best-selling five book suite Ramsès, which is today published in over twenty-five countries. Each volume encompasses one aspect of Ramses's known historical life, woven into a fictional tapestry of the ancient world for an epic tale of love, life and deceit.

Jacq's series describes a vision of the life of the pharaoh: he has two vile power-hungry siblings, Shanaar, his decadent older brother, and Dolora, his corrupted older sister who married his teacher. In his marital life, he first has Isetnofret (Iset) as a mistress (second Great Wife), meets his true love Nefertari (first Great Wife) and after their deaths, marries Maetnefrure in his old age. Jacq gives Ramses only three biological children: Kha'emweset, Meritamen (she being the only child of Nefertari, the two others being from Iset) and Merneptah. The other "children" are only young officials trained for government and who are nicknamed "sons of the pharaoh".

These books are typically classed as historical fiction; many of them delve into the supernatural powers given to the Pharaoh, however, and could be considered fantasy by loose definition.

The story of the greatest Pharaoh in history

The Stone of Light Series

The craftsman's village at Deir al-Madinah is one of the few places in the ancient world where life has been vividly preserved. Jacq uses real names, characters and scandals to reconstruct life in this extraordinary place.

The Queen of Freedom Trilogy

The tale of Queen Ahhotep, Egypt's "Joan of Arc" and her crusade to liberate her nation from the Hyksos oppressors

The Judge of Egypt Trilogy

In the Age of Ramses, Egypt's power is unchallenged. However, a dark conspiracy seeks to strike at the Pharaoh ... only an idealistic judge and a young doctor stand between Egypt and oblivion.

The Mysteries of Osiris Series

The Vengeance of the Gods Series

All content from Kiddle encyclopedia articles (including the article images and facts) can be freely used under Attribution-ShareAlike license, unless stated otherwise. Cite this article:
Christian Jacq Facts for Kids. Kiddle Encyclopedia.