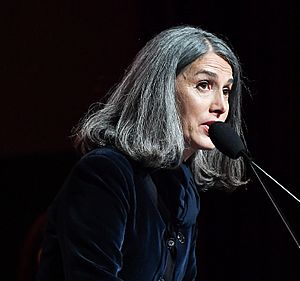 Christine Leunens (born 29 December 1964) is a New Zealand-Belgian author. She wrote the novels Primordial Soup (1999), Caging Skies (2008) and A Can of Sunshine (2013). The movie Jojo Rabbit (2019), directed by Taika Waititi, was based on Caging Skies. Waititi won an Academy Award for Best Adapted Screenplay for the movie.

Leunens was born in Hartford, Connecticut, United States. Her mother is Italian and her father is Belgian. She's lived mostly in Europe and New Zealand. She is a citizen of both New Zealand and Belgium. She is married and has three children.

All content from Kiddle encyclopedia articles (including the article images and facts) can be freely used under Attribution-ShareAlike license, unless stated otherwise. Cite this article:
Christine Leunens Facts for Kids. Kiddle Encyclopedia.